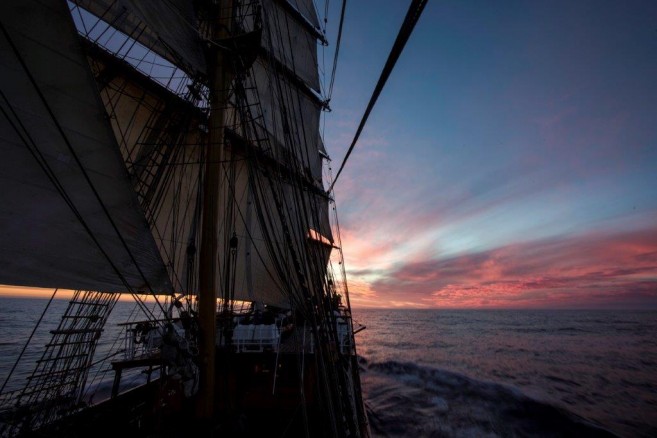 Up before midnight, with no time for a decent sleep after dinner, and finished at four with no decent time for a decent sleep before brekkie. The First Watch has time for a nice block of sleep from about two minutes after midnight followed by a shower and a leisurely breakfast. With the Day Watch a bit of organisation and an early night after the daily briefing from Eric the Informative gives a decent sleep before the morning sun greets the soul with the promise of a new day and fine sailing. But there is no way to get a block of a wholly inadequate five hours of sleep on the Dog Watch without missing out on food. And food matters in the cold.

The Dog Watch is cold - the coldest part of a cold night. It rains. It is dark. The deckhouse is filled with people trying desperately to stay awake until the next activity, or dozing in the hope that someone will rouse them when it is time to brave the frigid wastelands of the foredeck, peering hopelessly into the murky gloom in the desperate hope of spotting an iceberg or errant container ship which somehow eluded the radar and vigilant eyes in the wheelhouse. And hoping that the relief in the deckhouse have not themselves dozed off and will show up before hypothermia sets in. The seemingly endless cycle of thawing frozen toes and fingers just in time to go back out and lose all feeling again. Crawling to the deckhouse just before midnight, hoping that the wake up calls worked and we are not short handed. Murphy dictates that the fewer people who show up on watch, the more sail handling in the dark will be needed. Murphy dictates that the Captain will decide to rebrace and set staysails at ten past midnight, and the Mate will decide to gybe at twenty to four - still, the activity compensates for covering the missing shifts at wheel or lookout in the cold. Yep, the Dog Watch sucks.

However, it is also magical. The phosphorescence glowing in the moonlit wake of the Europa. The Southern Cross gleaming in the sky showing the way to South Georgia. The blackness of the ocean, and the long line waves reflecting the full moon most of the way to the horizon. The freshness and crispness in the air. The noises of the boat and the ocean, yet the silence of it all. The serenity and power as the ship forges majestically through the void. The delicious midnight soups undoing all the dietary discipline of the last few months. The smell of freshly baked bread. The opportunity for some me-time, contemplating the immensity of the ocean, and how in a crowded world we have found hundreds of miles of emptiness all around. The chance to catch up with the reading list set
by Jordi and Sarah. The chance to blog. Being the undisputed custodian of all the public spaces within the ship. Chillin’ out in the warm fug of the deckhouse listening to the playlists selected by Merel and Martijn; and idly passing judgement on their musical choices (*). The sky getting lighter towards South Georgia with the promise of a slow Southern dawn. The sun bursting forth, and the first rays warming fingers, toes, and the heart. The watches slumbering obliviously in their dark and cramped cabins are missing out again – for the Dog Watch is magical.

(*) So far they are passing with flying colours, although much of the music is older than they are.