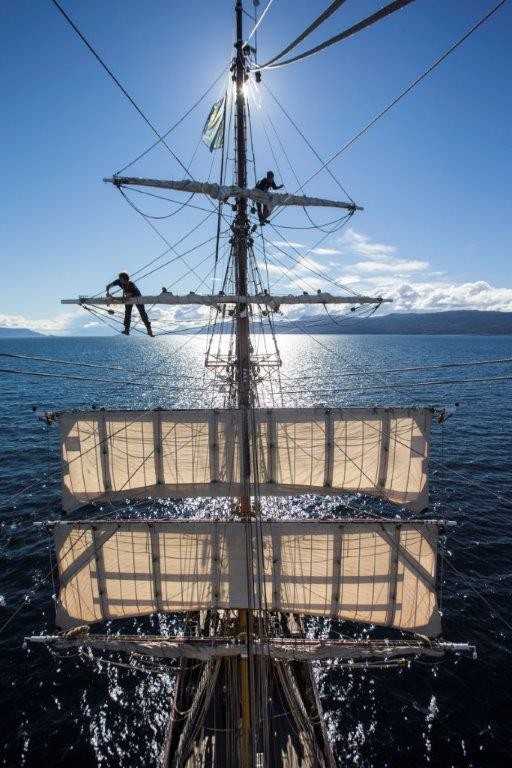 Yesterday we left the Beagle Channel under basically full sail, with sunny skies and plenty of Dusty Dolphins flying up out of the water all around the boat. A storybook departure. This morning came more sobering news, with three bells and an unexpected 9AM weather update from the Captain. Apparently our current course would have seen us arrive into the Drake Passage around the same time as an approaching system of Force 10 winds + gusts.

Timing is everything - different ocean-based trips out of Ushuaia are sometimes said to experience either a Drake "Lake" or a Drake "Shake". It seems for the moment we have outselves a Drake Gate - a quickly moving storm front insisting we shall not pass until it does. So we regroup and bide our time for what is hopefully a brief period, adjusting to the swell alongside magnificent albatrosses that glide, impossibly, mere inches above the waves, courtesy of their world-beating wingspans.

My Uncle once told me that the difference between a speed boat and a sailboat is that while speed boats are always in a hurry to go somewhere, sailors are "already there" when at sea. It certainly felt that way again last night, before the change in course - when I was at the helm for the end of the Dog Watch at 3:40AM, the Europa making 6.5 knots or so on a 200 degree true course toward Cape Horn, an almost full moon lighting up the sky behind us. Even with Antarctica as the ultimate destination, it is such fun to just be sailing the open waters, especially on a boat like this one.