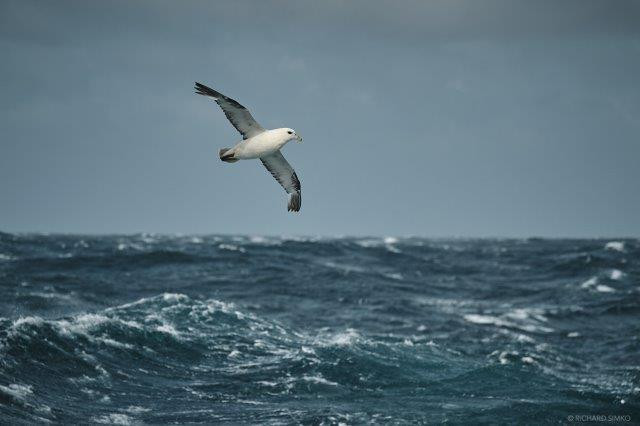 The “Epic Low” is back. The North Atlantic had another surprise in store for us. As if the ocean wanted to put us through one last test before we reach our destination. As we were approaching the entrance of the English Channel, we found ourselves in the midst of a low pressure system, that instantly brought back the memories from the beginning of the voyage, when we were sailing through a similar, but much bigger low pressure system in the South Atlantic. Upon reaching the tropics, we all
put away our foul weather gear thinking we won’t need it on this trip anymore. Wrong. The weather outside definitely calls for waterproof gear. We are all wet, salty and clothes once again refuse to dry between the watches. Safety lines were rigged on the deck and we all wear harnesses. The sea is much rougher than anything I experienced on the Drake Passage this Antarctic season. The temperatures are of course much higher and thus more bearable, but the wind-chill is still cold, especially when standing on the helm for an hour. It is raining and waves are regularly splashing over the deck. The wind is squealing, blowing with speed of 40 knots, gusting at 50. The ship is rocking and heeling as she battles with the swell. An occasional rough wave hits the hull with a big bang, making it shake, but she prevails and continues to push forward. Most of the sails are furled, leaving us just with essentials to keep the ship as stable as possible while keeping the speed. It’s pushing us little bit more south than desirable. The course led us to the Bay of Biscay rather than English Channel. According to the weather forecast this was expected.

Even though the weather is not very nice (depending on perspective), the sea is spectacular with that high swell, gloomy cloudy sky with occasional sun rays piercing through during the day hours. There are plentyl of sea birds following the ship, such as gannets, the largest seabirds in the North Atlantic, fulmars that enjoy the fly-over above our heads, and small but though Wilson storm petrels joining the party too. It is all like a beautiful dramatic painting. Earlier in the week we had another pod of pilot whales joining us for a while. The traffic in these waters also increased. A couple of times we spotted ship lights on the horizon, some expected some not as they didn’t show up on the radar. Perhaps at some point we are going to need extra lookout duty, just in case. There is also a higher chance of bigger items floating on the water surface in this area such as palettes or even containers. (yes it happens)

We all feel the land is close, really close. We can almost smell it. Last couple of days we sailed fast. From the moment we turned off the engines earlier in the week and set sail when the wind picked up, we are averaging around 7 knots, occasionally peaking at 10. That is a very good speed and it brought us in very close proximity of the English Channel. That also means the end of this voyage is nearing really fast. I think it is going to be a bittersweet end for most of us regardless whether we wanted to keep going or be already at home. The camaraderie and bonds we forged in the course of this trip are strong. It will be hard to leave all these familiar faces and our small home Europa behind and not feel a little sentimental about it. But we are not there yet, there are still few more days to go and we also have to pass through this low pressure system first.

Something tells me that the next week post is going to be the last one from me. It is going to be the 12th blog. 12 articles, 3 months on the sea. It feels like ages ago since we left Ushuaia and here we are, at the verge of completing this incredible journey in spite of many doubts some people ashore had about our capabilities and experience to do so. Next week we prove them wrong. And now, I am on helming duty steering the ship home. Talk to you next week.