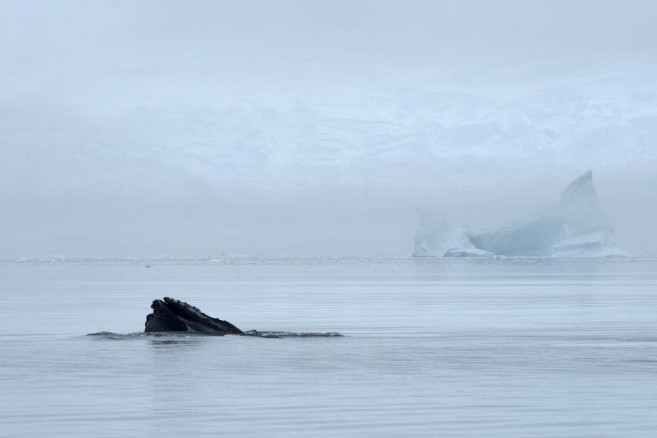 Most often, when a glacier calves, no one will see it. All these enormous glaciers in Antarctica -  all the icebergs we see in the bays –
only a few of them have been witnessed falling. Mostly, you will only hear a glacier calve. And even though you know the thunder arrives much later then the lightning, you will turn your head and look for the calving. You will see a wave, and maybe the newly fallen ice tumbling over, searching a balance. But the source of the sound has passed.

Today felt quite the opposite. Many times a glacier calved as we were nearby and looking. Today was the day of calving glaciers and feeding whales. Not a bit, not at a distance, but right where we were and many times. It all started in Paradise, where we woke up. A beautiful bay surrounded by glaciers. Grey and calm, a bit of rain, perfect weather and surroundings for a zodiac cruise. When the first calving happened, it happened right in front of us.

From Paradise we went to Neko Harbour – as did the whales. Some sleeping, just hanging around at the surface, some feeding, showing of their baleens. We saw them, not just once, but anyone staying out on deck could see them almost all the time. In Neko Harbour the calving continued. All the ice in the bay made it almost impossible to land. Almost, but not quite! We set foot on the continent again, climbed up the hill, watched out over the glacier, the ice filled bay and in the middle of all that, our ship, the Europa. When we come back on board we will head back North. We have been quite lucky here at the Peninsula. Let’s see how lucky we are with the Drake.