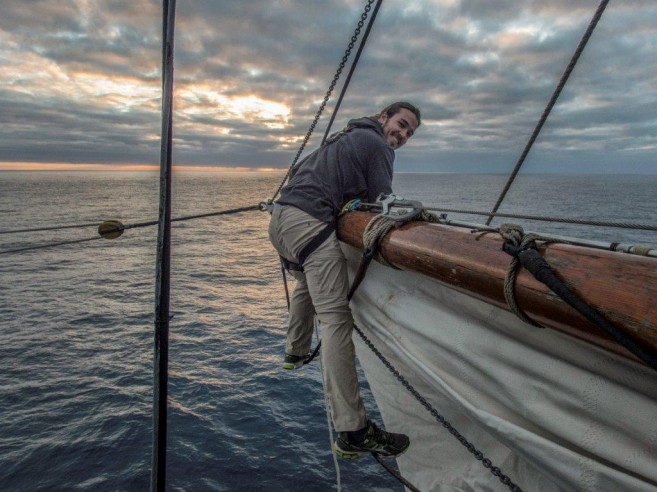 Changing weather as we get closer to Tristan da Cunha.

We wake up under the sound of the engines running, while out on deck reigns a similar situation that we had for the last couple of days. Square sails remain clued up and most of them furled, and just some stay-sails flutter tightly sheeted on light headwinds.

Once more a gorgeous sunrise welcome us to the new day, now with the sun starting to shine between scattered low clouds and over a sea that slightly increased from yesterday. Motoring against the wind is time to take the staysails down and furl them, just the Spanker remains set. During the morning E-ly light air decreased to 2 to 3kn, while Europa’s both engines push us at 6kn of speed on a good 055º course. Once more, taking advantage of the fair weather, crew takes the chance to continue with some of the maintenance projects they are working on, like grind and weld a block frame and exchanging buntline blocks up the rig.

As the hours pass by, the weather started changing, with the sky becoming more overcast and under grad-ually veering breeze. Experiencing those conditions we brace around expecting the SE-ly winds to in-crease along the day.

And indeed, before afternoon coffee-time this anticipated change on the weather state arose, making for many of us to give a hand on deck to unfurl and hoist away Gaff Top Sail and all our Jibs and Staysails. Thanks to the help of them, one of the engines is turned off. Long NE-ly swell stills make us slightly pitch taking away about a knot of the speed that we could be doing.

Later on, with the light wind turning more S-ly, Captain decides to set all our canvas before it gets dark, and keep motor-sailing on our NE-ly course. Rig gets pretty crowded with many enthusiastic people try-ing to develop, learn or increase their climbing and unfurling skills.

Located as we are still below the 40º S, different wind conditions would be expected. They are generally known as the Roaring Forties, where supposedly strong Westerly winds flow around the Southern Hemi-sphere. Due to the more or less reliable winds, the latitudes comprised between 40º to 50º S were of a great help for the sailing from Europe to the West Indies during the Age of Sail, between the 16th and mid-19th Centuries. A remarkable period when square-rigged ships explored the four corners of the world, traded goods and carried settlers with them. The boundaries of the Roaring Forties are dynamic and can shift depending on the time of the year and the distributions of the High and Low Pressure sys-tems located North or South of them, like the process we are undergoing those days.

The period of flat calm that we just experienced is related with the area of High Pressure normally located at Subtropical latitudes North of our track. This anticyclonic systems are called the Subtropical highs, affecting latitudes between 30 to 35º, but in this occasion they could be found South of where they nor-mally sit, straight on our course just below the 40º S. These Subtropical highs are nicknamed the “Horse Latitudes” and repressed a problem in the past times of sailing, when many ships fall into and had to wait on windless situation, rolling with the swell until they could catch some wind to keep sailing. This zone lay under a ridge of High Pressure, where little precipitation falls and the winds are light and unstable.

The curious affectionate name of Horse Latitudes is of unknown origin, but it is likely to come from one or the other sources listed below.

The first one is linked with the way the sailors were hired in the old times. Before embarking they use to receive a month in advanced payment, to be able to acquire the equipment needed for the voyage. They frequently had spent all this money before embarking, with the result of having to work a month without income. Ship’s Masters often found difficult to motivate their crews during this period, while the ships were reaching latitudes comprising between 30 to 35ºS. This period was traditionally called the “Dead horse”. At these latitudes they were frequently falling on the area under the influence of the Subtropical Anticyclones. After this unpaid time on board, the crew use to do a ceremony to celebrate the starting of the payment of their salaries. On this ritual the seaman parade a stuffed model of a horse around the ship before getting rid of it overboard.

An alternative story tells about the times when the Spanish transported horses by sailing ships to their colonies in America and West Indies. Arriving to those mid-latitudes, often the calm conditions made for extending the duration of the trips when the ships drifted over windless still seas. The lengthening of the time at sea could result on their fresh water supply becoming short. We must remember that on this epoch the voyages were made strictly under sail, when there were not such things as generators or water-makers aboard. The lack of drinking water made impossible for the sailors to keep the horses alive, and they ended up throwing the dead animals over the side. This band of generally calm latitudes became associated with one or another of those historical facts.

The progress done during the last 24h it has been of 136nm. Now just 273nm are left until arriving to Tristan da Cunha.

Despite the lack of strong winds, the light breeze blowing so close to the archipelago brought us several interesting bird sights today. On a couple of occasions huge Wandering or Tristan albatrosses (actually very similar and of difficult identification when spotted at sea due to large age and sex related variations) flu close to us, accompanied by flocks of Prions and a few Spectacled petrels. Another fascinating bird that paid us a visit today were the Great shearwaters. This species is considered a near endemic for Tris-tan archipelago, as just a very small percentage of their population nests at Falkland Islands, the rest is mostly burrowing their nests at Nightingale, Inaccessible and Gough islands. Regardless of this very restricted breeding area, their winter migrations brings them all the way to the North Atlantic as far as Greenland and Newfoundland.

Sailing along, on a couple of occasions surprised lookouts reported seals snoozing at the surface holding their flippers off the water. Its been a few days since we left behind the thousands of Antarctic Fur seals in South Georgia, and now we are encountering their relatives, the Sub-Antarctic Fur seal. Those seals breed in busy coastal colonies on islands of the Southern Indian Ocean, in all Tristan archipelago and Gough Island, the latter holding up to 80% of a total population of about 350.000 individuals. More abundant in the past, they were heavily hunted in 18th and 19th hundreds for pelts, meat an oil and more recently for rock lobster bait. Nowadays they are protected.

Juveniles and females can be seen around Tristan all year round, but adult males are more seasonal, com-ing back to the islands between October and December to compete for territories and harems. In January is time for their departure, even though some of them some return about 1 or 2 months later to moult.

Out at sea their whereabouts are poorly known, but they can reach South Africa and South American coasts