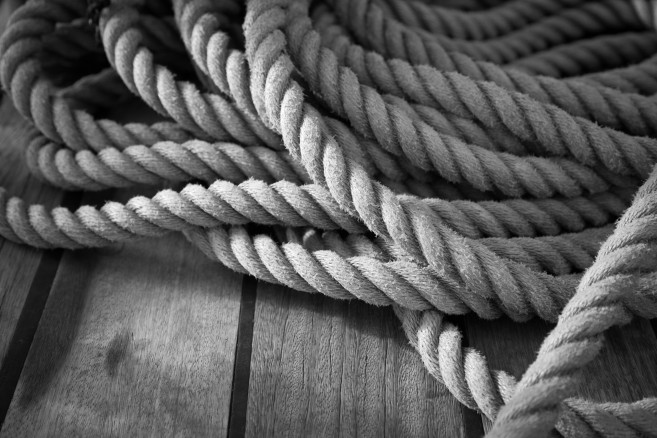 On our second full day at sea, things are starting to happen during the night watch, things that could only be attributed to mischievous forces at play. And since we all knew that we were such a happy and friendly crew, we had to arrive at the conclusion that it had to be them – the kobolds of Europa. I had read stories about them as recently as a few weeks ago, and although those tales had been from a highly reliable source, Ninja Helmling, the mate on the other crew that had delivered the ship across the Atlantic, I still had been deeply sceptical of the whole thing. Surely those kobold stories were just stuff sailors made up to entertain and confuse land-lubbers and children? But now, in the middle of the Scotia Sea, the evidence was mounting.

The handy-billies were all tangled up and twisted whenever we retrieved them from the forepeak, with their lines found wrapped inside and around the parts between the blocks. The first few times, you blame it on the rough conditions, clear the mess, and carry on. But after the third time finding one of these things all tangled up, you start to wonder. And for a novice Europa sailor (like myself) it was even a dual challenge – I had to figure out how to help disentangle the thing, while learning what it is supposed to do: in the case of the handy-billies, these are small block-and-tackle purchases that are frequently used to work on the tacks of the courses as these are reset after wearing ship. And apparently, we would be wearing ship a lot in this area.

But hey, wasn’t it way more likely that novice sailors like myself were behind the mayhem? After all, the most common problem with any complex system is typically user error. And by Zeus, the rig of the Europa is a complex system! But alas, the troublesome episodes kept us on our toes, in ways and places which could not merely be dismissed as novice mistakes.

Resetting the tack of the main course on the sloop deck, we found that somehow, the whisker pole for the main course had managed to wrestle itself free from its spot along the sloop’s cradle. And of course, it had somehow managed to move forward just enough to snuggle up with the big deck-cleat that it was supposed to stay well away from – as we needed this cleat to belay the tack on, of course! And the strange part was, once in its new position, the whisker pole had somehow managed to fasten its lashings in a way that it took a lot of convincing as well as a generous collection of Spanish curse-words to return it to its intended position. Surely, that could not be blamed on novice sailors, with so many seasoned deckhands around doing regular deck rounds after each watch change? No, something was going on.

Once on the other tack, we also found that the fore course’s lazy tack had somehow ended up wrapped around the windward sheet. There it was, just hanging around, as if this was the most normal thing to do. OK, it is called a lazy tack for a reason, but that stuff was just appalling!

And this was just the rigging incidents. The door of the forward staircase to the forepeak kept opening itself ever so slightly, despite everybody’s best efforts to close it with the door handle after each passage through the doorway. And of course, as soon as you discovered it not properly closed, you also hit your head against the ceiling of the staircase, although you had learnt weeks ago (weeks, I tell you!) that you had to watch your head in that staircase.

And to top things off, the door handle in the bathroom of the “crew cave” decided to quit and would simply refuse to open the door lock for a full 15 minutes, despite one deckhand’s best efforts to escape. And that was certainly not a novice sailor, but one of our chippies fighting that lock!

Heading for my bunk, I had to conclude that my initial scepticism and disbelief had to go, and that I just had to accept that kobolds were a part of our life now. Acceptance is the first step they say – but it was only one step after all, as we had to learn the next day, as four out of five crew harnesses were found to be completely twisted, as we took them of their hooks in the forepeak. Alright, kobolds, from now on I will bring my harness to my bunk with me.