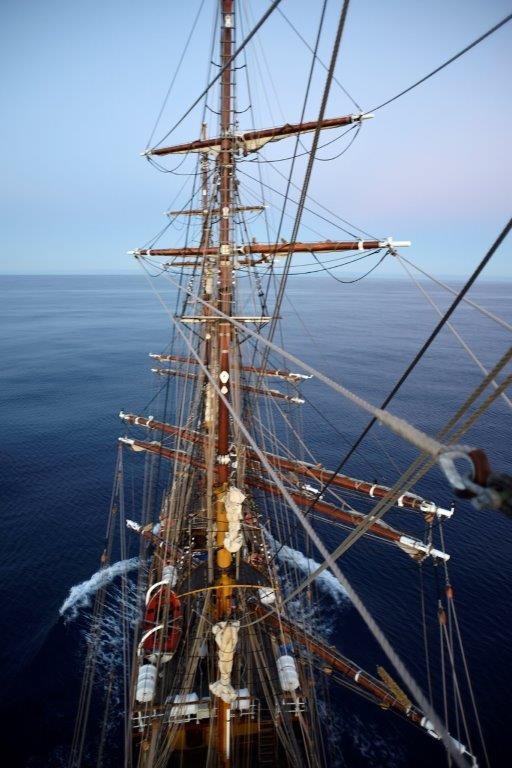 And so we leave. Straight after our landing at Neko Harbour, we head for the Drake. We still have a good 50 miles to go before we are out on open waters again, and according to the weather forecast, even there it should be quite calm. For this reason it is decided that watches will only start in the morning. We still meet some icebergs during our firstnight, but after a while, we have left both land and ice behind us. During the first day we could just as well have been on our way to another landing. Well attended breakfast, a fire drill, the much anticipated lecture on Geology by deckhand Beth .. and so we continue North. The voyage crew is steering the ship and on lookout. How different from that first night, thrown in to the Drake Shake so suddenly, thin watches with almost no time to warm up. Now, we are motorsailing, though in this case most power is coming from the engine. We are sailing in the planned direction, with an average speed of 6 knots. As we expect some strong winds to come later during our crossing, we keep a quite Westerly course. Janke has told us they are coming, we all know it, she has even printed out the forecast for us. But for now we are just enjoying taking things easy. We do what one does on the Drake – life from watch to watch and think of nothing but now. During the night the ocean is like oil. The morning clear and crisp – not a cloud, only long moments of pink and blue so typical for the polar regions.

I always thought the Drake Lake was one of the many myths that belong to the ocean and ships. For sure this could not exist. Just a way of easing one’s mind when the rocking never stops and still many days to go. Here we are, sailing the myth. Someone says; it is almost like the Drake is holding her breath. She has been holding her breath for 48 hours now.