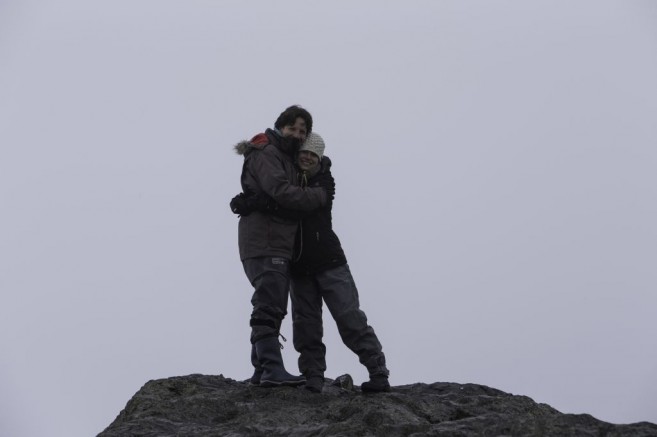 We learn a lot about animal behaviour from the guides at this trip. Specifics about the various species of penguins: what they eat, how long they feed their young, how long and deep they dive and a lot more that is handy to know when most of us are back at their desk- or similar jobs. Who would have thought that elephant seals (or was that fur seals) could mate horizontally and vertically?

And that was only the beginning, salps and krill in several stages in development were studied in detail, hump back and other whales were observed and consumed more Gb's of memory cards than they can swallow of krill.

But one thing has not gotten the attention it requires, maybe because it is not about animal behaviour, but human behaviour. By now, the kitchen staff and crew may have guessed it, I am talking about 'that specific element of voyage crew behaviour that is called 'THE 7 o'clock QUEUE"!

It's not that the humans of the voyage crew are bored, or actually consume too few nutrients. Both are impossible if you observe the quantity of information and food that is consumed. No, THE QUEUE is that specific element of human behaviour that only appears in this group of people at a specific time.

Picture the EUROPA around dinner time. About 10 minutes before feeding begins, things start to move around. Humans look at each other, find a reason to go below deck nearer to the galley or decide that reading that book in the lounge is better than reading it in the deck house. They may also unnecessarily rearrange stuff in their cabin or bunk. Watches are being compared, and an eerie quiet comes over the ship, so they don't miss THE CALL. Then the familiar feeding call is heard 'Dinner time…!' Gentoo chicks could not be faster than the voyage crew to line up for food. Literally within seconds the hallway fills up with a line of humans – sometimes all the way up the stairs and almost into the library.

Is it because there is too little food for everyone, so it becomes important to be one of the first to receive the plate full of excellent nutritive 'stuff'? No, there is more than enough for everybody, and often there are 'seconds'.

I learned that this queue-ing behaviour is best observed from the start of the line, only there can one see the behaviour in detail and experience the true queue emotion.