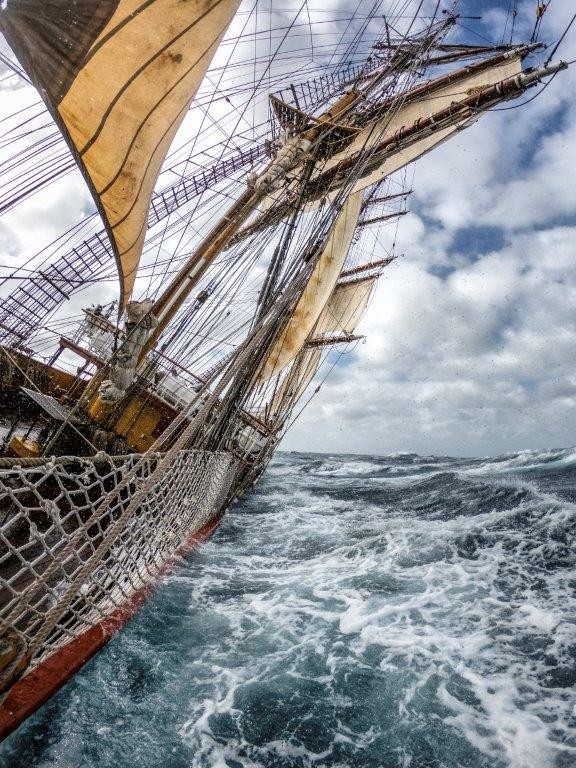 From the early morning onwards the wind started to pick up, while the ship is being prepared for the stormy weather to come, keeping the night watches busy on deck and aloft. First the braces are pulled tight to sail on close-hauled Port Tack, before the swell starts washing our decks. Then we start reducing canvas and furling the sails that gradually are coming down, starting with the Outer Jib, followed by the Top Gallants. When the wind blasts started to be about 40kn, both Courses are clewed up and stowed away. Parallel to the steep wind increase came also a rise on the swell. And a
couple of hours later, already before the sun rises behind the clouds on that overcast day, water regularly wash over the Main deck with every big wave that hit our Port side. Europa ploughs the high seas, dropping heavily on the swell, but still making about 5kn under the Courses and Top Sails, head rig still set but the Outer Jib, Aap as a substitute for the larger Desmond and the Spanker. And for all of us, the untamed seas act as a reminder of the ferocious conditions that from long ago made famous those latitudes of the South Atlantic. With a day like yesterday, many thought we were already off the harsh weather grip, but since the early morning, today the “Roaring forties” are paying good tribute to their name. Seas rolling high as far as the eye could reach, its waves and swell tops white with foam could bee seen during the whole day while courageously we take the helm on our hands or hold-on while doing the lookouts. The situation didn’t abate yet in the afternoon. On the contrary, it even seem  to became slightly stormier, with the wind howling steady 35 to 40kn and occasionally gusting  with stronger force. All indicating that was time  to  tight our waterproof clothes and get
ready to step on the wave swept main deck to clew up the Upper Topsails, lower the yards, pull hard on the buntlines and climb aloft for furling. From then on, with water coming over Starboardside rails, Europa keeps holding-on braving the roaring situation, still keeping some good speed of 5 to 6kn towards our destination, under the reduced amount of canvas. Still some occasional waves struck Europa’s hull with  thundering sounds, breaking against her sturdy hull and swashing spray up to the lower yards and above Sloop and Poop decks, washing some unsecured rigging off the pins. Crew quickly pick up the loose ropes before are washed overboard through the freeing ports, that slam continuously in an effort for draining the deck. Luckily the overcast morning was gradually dissolving on a sunnier afternoon, this together with the mild temperatures of about 13ºC at least made for a pleasant sailing and rolling time, while dressed less of an Antarctic fashion, but still wearing our outer foul weather gear, Is on days like today that care must be taken to move around the ship. Seems like every movement requires anticipation and thinking. Cabin drawers and cabinets fall open, cups and plates require always a hand to hold-on them and meals buffet table can end up on a nutritious mix of extensive messy proportions. The calls for cleaning buckets ands rags from the galley are often heard today during meal times, as for many is still difficult to eat and drink on a heavily heeling and rolling ship without spilling milk, juice, coffee and teas and of course our daily tasty soup, always served for lunch regardless the weather, wind and sea state situation. On deck the situation is similar. With water splashing all over and swells climbing over the rails as the ship heels and rolls, paying
attention while working or walking around can save from a dip in the scuppers. Time after time, those are filled with large amount of water, making for unfast items to be washed overboard if someone is caught unaware by a breaking wave. Circumstance seen today by our Captain Janke that bravely tried to catch a loose pair of glasses  from the water filled lee-side of the Main deck … with the only result of getting drenched clothes and her boots water filled as well. But that is the life at sea, the beauty of the long sea passages, and the added appeal of the variable and unsettled meridional latitudes. One day the sun shines, fair winds fill all our canvas and we sail over a calm ocean; the next day we are caught on stormy seas, foul winds and stormy meteorological conditions. But bad weather, the unstoppable watch system around the clock and the hard work at sea, can be borne up against very well, if one only has the spirit and determination to let go fears and dismay. Grab a moment to observe the grandeur of the ocean and its occasional hot temper, take the wheel and ride the swells towards an appointed destination, or observe the enraged winds and swells while keeping a good lookout. For the passionate birdwatchers we are entering a seabird paradise, where many species can be seen that nowhere else lay their eggs but in the close Tristan archipelago or similar Subantarctic and temperate islands. Today a couple of new ones had been spotted. What seems to be a handful of Broad billed prions flew next to us for a while, with their characteristic large head and steep forehead,  and broad based beak. Nevertheless the prion group always show identification difficulties as many species are quite similar to each other and share the oceanic areas
if not also some of their nesting grounds. A couple of Soft plumaged petrels were spotted today as well. Quite solitary at sea, those have a South Atlantic and Southern Indian Ocean distribution, nesting in colonies on subantarctic Islands and Tristan da Cunha-Gough archipelago.