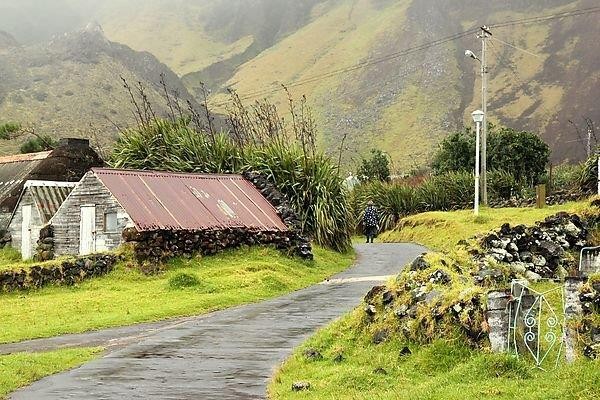 On Easter Monday the 6th of April we visited Tristan da Cunha, a small volcanic island in the middle of Atlantic Ocean.

It was our only stop on the way from South Georgia towards Cape Town, a welcome opportunity to have a short break from sailing and to walk on land again. After a
friendly welcome at the port and the tourist info, the Tristanians offered a selection of guided tours to see the island in an organized way, but many also took the chance to wander around on their own for at least part of the day.

The first thing we noticed when walking across the settlement was quietness. We didn't hear the ocean any more, nobody was driving a vehicle or working in the garden, even most the dogs just looked at us and didn't bark. A few locals walked down the street and greeted us with a soft "Good morning", shortly breaking the silence when passing by. We looked at the houses on both sides of the street, painted in different colors and surrounded by small gardens, and thought about how it would be to live in one of them. The door to the village church was open, we entered and were greeted by the reverend who soon held a short morning prayer. Only some of us visitors were present, the Easter service to the local population had most likely taken place already earlier.

Tristan advertises itself as the remotest (inhabited) island in the world which makes it an exotic tourist attraction, but with no airport and only a handful of ships per year it is far from being overrun by visitors. For most of the time, the 300 inhabitants live there largely on their own, with only a small number of "outsiders" such as a veterinarian and a couple of scientists added to the mix. It is a community where the land belongs to everybody and where the rules are designed to prevent large differences in wealth between the inhabitants. Every family is entitled to have a potato patch, two cows, two sheep and a few chickens, and they generally work as farmers or fishermen. Except for the possibility to buy daily commodities in the supermarket or a drink at the pub, money plays little role in their daily life. Besides the income from tourism, Tristan exports lobsters and sells fishing licenses which bring in enough money to fit the houses with a reasonable level of modern comforts and to import tractors, tools and other items which are needed or desired and cannot be produced locally.

We joined a short tour presenting the village museum, a traditional house showing how life had been on the island about 100 years ago. After the tour we wrote a few postcards and had sandwiches for lunch, complemented with fresh tomatoes and apples from the shop. Then we started walking on the only road leading out from the settlement, which ends at the potato patches a few kilometers away. We didn't get far before getting a ride at the back of a pickup truck driven by Marc, a French scientist working at the nuclear test monitoring station located on the island. The station is part of the worldwide network of stations which control that the international treaty banning nuclear tests is respected.

Upon returning at the settlement, we had still a quick tour by Marc at the monitoring station, then it was time to step in the zodiacs and return to the ship. We wished we had been able to stay longer, at least a few days to meet more locals and appreciate the island in an appropriate way without hurry. Unfortunately our ship had a schedule to meet and in the evening the wind was blowing from a favourable direction for our passage towards Cape Town. After a short swim in the ocean and
dinner we lifted the anchor and sailed away.