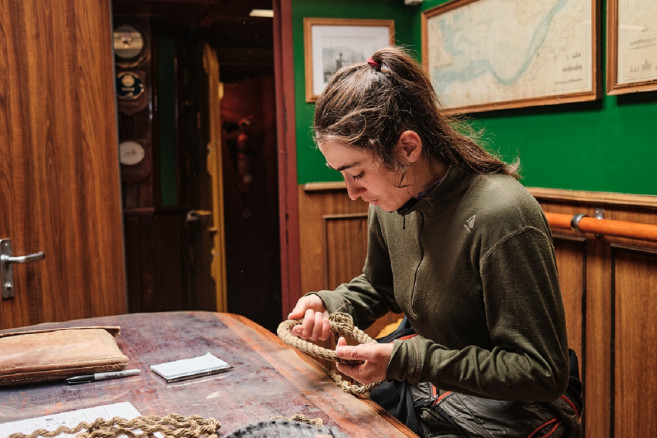 The good sailing continued for the night and the early hours of the new day. By then, the Westerlies become 15 to 18kn of Southwesterly as we steer northwards braced Close-hauled at a good speed.

Clouds in the horizon, change on the barometer readings, growing seas from the Northwest. Well learned on reading the signs that foretell the coming weather, in the morning the Captain asks to reduce sail. Soon we loose the fair winds and the sunshine for Northwest and North-northwest headwinds, overcast and drizzle. All Squares are clewed up and furled, swift hands pull on the Middle staysails downhauls and pack them away, also the Outer Jib, Desmond and later on the rest of headrig and staysails. Motoring then against the 30 to sometimes gusts of 35kn of wind, Europa pulls up 2 to 3kn of speed on her way north, with an Eastwards leeway due to the strong current that flows clockwise around the Antarctic Continent.

Those northerly winds brought also a slight rise on the temperature, not feeling anymore the intense chill from the south.
Forecast tells about a few hours of those conditions before the wind shifts again to allow sail setting. She will have to get through the winds blowing on her nose and the crashing waves, just facing it under engine. And she rolls and pitches and heels on the Drake Passage swells. It is difficult to walk around the ship, have a quiet meal, dry the wet gear.

We all had some time to embrace her movements and the life on board, it is not like when we freshly embarked and braved the way south a couple of weeks ago, but nevertheless seasickness strikes on some once more. It will take again some time to get used to the constant motion of the ship in the stormy waters.

For the many interested that overcome the motion sickness, the daily bird survey project whilst at sea, continue on deck. Today less albatrosses and petrels show up, maybe feeling too the weather change.

No matter the meteorological situation, maintenance projects keep on going on deck and aloft. A rig like ours in good working order requires time and dedication, rope work, changing lines, place and replace chafing gear, stitching sail repairs and many other jobs of the sort. Outdoors and indoors as well. Officially a library, often a sail loft repair, lately a drying and inspection area for lifejackets. They too have endured days in a row of rainfall and sea splashes keeping us safe on their rides back and forth ashore in the zodiacs.

During the last 24 hours, the good sailing first, then the use of engines full-on facing strong winds and swells, under both sunshine and rain, getting to grips with the Drake Passage volatile mood, have positioned us 109nm closer to our destination. Having started the oceanic crossing further south than Europa’s entry point to the Antarctic islands at the beginning of the voyage, that progress position us at a latitude just above King George Island, and still South of Elephant Island, the northernmost of the South Shetlands.