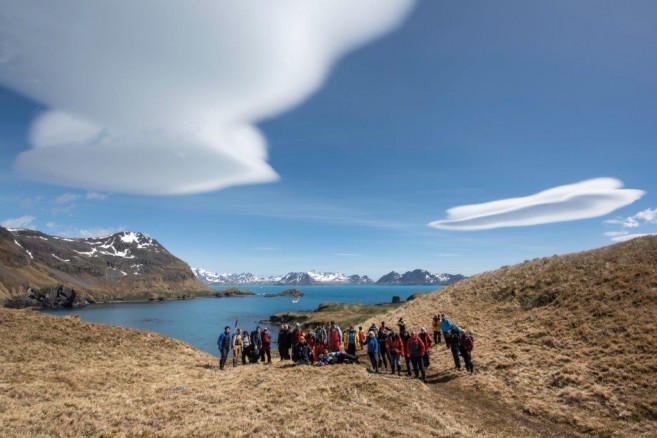 The Voyage Crew on this trip are an varied crowd. The stated nationalities (for there are plenty of dual nationals) are dominated by Australians, followed by the Dutch and the British. There are also token North Americans (both Canadians and their southern neighbours), and a solitary representative from Germany, Norway Ireland, New Zealand and one this Switzerland who somewhat confusingly speaks with an Irish accent to my ear, and certainly more of an accent than the official Irish person on board. Maybe he practiced his English in one of the many Irish pubs around the world.
Ages vary from the mid twenties to - well, let us just say that when I get to their age that I hope that I am as active and game as they are. I’d speculate that the average age is low to mid fifties, and this is probably a consequence of both the cost and duration of the trip. It’s yet another example of something where it is good to be young and fit, but having both the time and money is a luxury more readily available for the older generations.
Shapes and sizes vary as well. Some are slim, some less so - although down in the Southern Ocean everyone is wearing so many layers of warmth that no-one appears slim any more. As the weather gets colder it is increasingly difficult to understand how there was ever enough storage space for the clothing now being worn.
Stereotypes abound. There are so many Brits on board that the crew are continually replacing the flasks of tea in the deckhouse, and the breakfast queue for the toaster is followed by a polite and orderly queue for the Marmite. The Australians congregated noisily in the bar upon reaching South Georgia and caused Merel to wonder whether or not she should have commandeered more of the hold for beer supplies. The Kiwi was apparently immune to the cold and rain and wonders what the fuss was about - living up to the motto that there is no such thing as bad weather, just inappropriate clothing. And the Swiss works for a company which makes watches (amongst other things). Sailing history varies. Some have been on the Europa before, and one has almost been on the Europa before. Some have taken part in the Clipper Race, some are landlubbers. Some get happier as the wind gets stronger, some are filled with dread. Some have been on other tall ships before,
some have not. Some have crossed oceans, some have crossed harbours. Some have been to cold climates before; some consider anything cold enough to wear a sweater as a great reason to move to a warmer climate. Although secondary motivations for the trip vary, everyone is here to see Antarctica. Some are purely here for these destinations, while others are partly here for the journey, to live the history, to see the Southern Ocean when it gets angry, or for the adventure. One is here for a single perfect photograph and suddenly coming alive when we finally got to land on a beach with more than one or two penguins. Another has a tuxedo to wear with the penguins for an imperfect picture. Some actively seek out all opportunities to help the crew to sail the boat, others see it as a chore to do when on watch and avoided otherwise. As for me, the opportunity to sail on a tall ship in the wildest ocean on the planet and visit places I’ve only read about and wanted to go to for decades - what more reason do you need? The rumour on the grapevine is that Eric has decided that these blogs are to be published under the tag “Ghost Writer in the Storm” or something similar. Although I am neither a Ghost nor a Writer, and there has been a merciful shortage of Storms I quite like that tag and shall adopt it.

nice article....a taste of the camaraderie on board