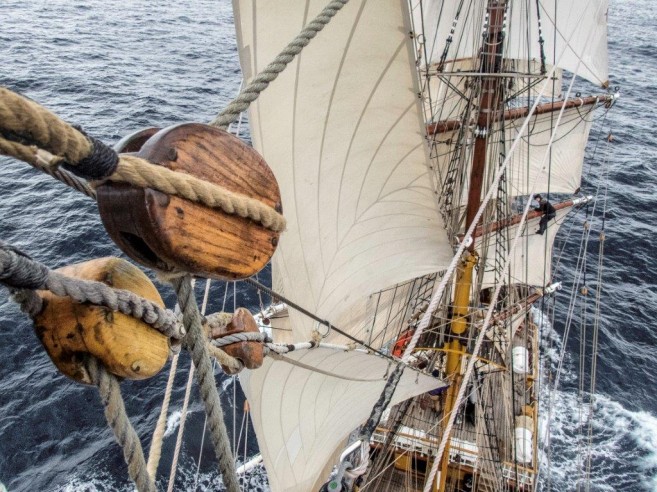 As a change from the last days, the new journey started under overcast skies although with similar wind conditions than last night of about light 10kn from a SE-ly direction. Slowly the NE-ly swell has been increasing and plays against us. So both engines are switched on, plus all canvas set are giving us speeds of about 7kn.

Later on, during the afternoon the wind increased, but unluckily, now that blows at 20kn it turned out to be N-ly, almost straight on our nose. We had changed course, steering straight to the island from our southerly position. We tried until now to brace sharper and sharper on Starboard tack but moment arrived to take away all Square sails and spend some time aloft furling them all

From then on just Middle and Upper Staysails remain set, together with Spanker and Gaff Topsail at the Mizzen Mast and all jibs in the bowsprit. After dinner Desmond flaps over the Main deck and the Flying Jib over the Jib boom, so they are taken away and furled.

Motoring as we are, trying to make some speed very close to the wind, both our engines roaring can give us speeds of about 6kn. Gradually getting closer to Tristan da Cunha, it will not be until tomorrow afternoon that we probably drop anchor at its shores.

At midday we still had 138nm to cover until arrival, approximately the same distance we have made during the last 24 hours.

But sure, if the weather allows and the low clouds lift a bit, the island could be at sight soon, at least with the first light of the new day. Being 13km wide, its highest point is the 2060m Queen Mary peak, bounded on most sides by high cliffs.

It is taking time and effort to get to Tristan da Cunha, and we had experienced any kind of weather on our way to get there. From the big swells and stormy winds over a week ago, to the dead calm seas and sunny last few days. From exhilarating sailing on rolling seas to endless hours under engine. We have realised that there is a reason for Tristan to be known as the most remote inhabited island in the world, laying 2088nm from Rio de Janeiro in Brazil, 1243nm from the closest island, St Helena, and 1491nm from Cape Town in South Africa, the last stretch we will have to sail after attempting a visit to Tristan da Cunha.

Despite the variable winds, the seas have been calm enough allowing the crew to gather us in the Deckhouse for a theoretical introductory talk about Celestial Navigation and the use of one of its most important tool, the sextant. After laying in the sun a couple of days ago, have our first contact with the device and take a few sights, today was time to have a glimpse at the basis behind it.

In the meantime, Tristan birds fly around the ship, including increasing numbers of Great shearwaters, Tristan albatrosses, Prions, Spectacled petrels, and a new addition to the list, some Atlantic Yellow nosed albatross have also been spotted today.

Similar in wingspan and body shape to the more common Black-browed albatrosses, this species display a conspicuous yellow stripe along the top of the bill. They are actually endemic to Tristan group, with an estimated total number of about 25.000 pairs spread along the archipelago. Like other many species of birds nesting at Tristan, their populations were greatly decimated during historical times due to collection for food, but nowadays they are protected in all islands.

Hi Kal, Europa has over 5,5 kilometers of lines including all sheets, halyards, clew and buntlines, brasses and mooring lines. Ofcourse we check them regularly and have a good supply to keep Europa in her best shape.

A few questions if I may.How many miles of rope is used on a Bark your size and do you keep a fair amount aboard for replacement requirements.I notice looking at the block and tackle that you must have regular checks due to usage and safety concerns.It seems to require much hands on for maintenance purposes.If the speed is reduced by Pitching is this from Bow to Stern and /or from Port to Starboard ? Cause of waves and/or swells with heavy winds ? Thank you,Kal Holloway...