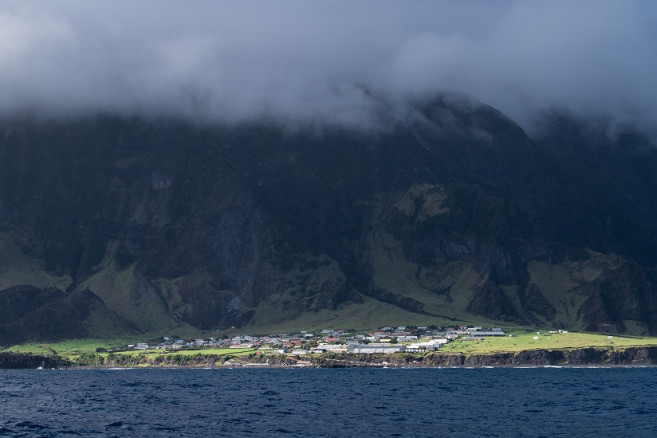 Summer day sailing by the remotest inhabited island on the planet.

1750nm from South Africa, 2088nm from South America. A steep piece of land measuring just 98 square kilometers in the middle of the South Atlantic, shooting up to 2062m in height. Its
isolation and location make it a special place for its ecology, politics, and ethnography.

After working out a suitable speed to schedule our approach during the night to be in its surrounding, right at sunrise, the remote Tristan da Cunha Island comes into sight with the first lights of the day.

A spectacular view in the clear skies, good weather, and just a rolling long swell, after all those past days on the high seas. Now calmly sailing under the squares up to Top Gallants in the foremast, Topsails in the main and Outer jib in the bowsprit, Europa keeps approaching along the morning the 600 to 700 meters almost vertical cliffs guarding the top of the 2060m high volcano. The tip of a massive complex rises up from the abyssal depths of the South Atlantic Ocean, more than 3000 m deep. Atop, its characteristic cloud cover seldom abandons its crater.

Although the largest and most outstanding, Tristan is not alone here. Nightingale and Inaccessible lie roughly 30km from it. To the Southeast, Gough Island is the nearest land to this archipelago. They are all located just East of the Mid Atlantic Ridge spine. Though underwater is the largest mountain range on the planet extending from the Arctic to Antarctica, a volcanically active scar on the face of the earth that separates the African and South American tectonic plates.
The islands were built by a series of volcanic eruptions and intrusions, resulting in complex geological structures. The oldest one is Nightingale Island with eruptions dating from 18 million years old, whereas the oldest rocks on Tristan are only some 200,000 years old.

Their isolation during this long period served as a sort of evolutionary laboratory, offering a great opportunity for the divergence of speciation for several animals and plants. The overall diversity is not the highest, it was always difficult to colonize such a remote territory, though the number of species and subspecies to be found here and nowhere else in the world is one of the reasons that make the set island and the archipelago such an interesting biological spot.

Slowly during the morning, Europa gets closer and closer to Tristan. Gorgeous sunrise is followed by a warm and blue skies day with some cumulus growing from the sea, and the moist trapped by the height of the volcano (Queen Mary’s Peak), creating clouds over its top, while Edinburg of the Seven Seas, the only settlement in the archipelago, shines under the first sun rays of the day.

Although discovered and named in 1506 by the Portuguese Admiral Tristao da Cunha as he sailed past en route to Cape of Good Hope, the peculiar history of such a picturesque little town started in the early 18-hundreds. By then it was first settled as a trading station by the American Jonathan Lambert, then as a British Military post as a measure against any French attempt to rescue Napoleon, imprisoned at St. Helena Island and afterward mostly colonized after shipwrecks and marooned crews.

Nowadays Tristan da Cunha has a permanent population of about 270 people. But remote as it is, today another vessel join our quick visit to sail by the island, the French catamaran Madamme. Both of us make our way to pass by close to the settlement and its little port, named Calshot Harbour, where the clearly visible swell breaking upon its entrance could not have allowed for a landfall today anyway.

The views from deck reveal the impressive northern sores of the island: flanked by imposing cliffs all around, to the Southwest the famous Tristan Potato Patches, where the local families all have a piece of land where to grow their vegetables; a 3km dirt road joins them to the settlement through the green meadows.

The Fish Factory stands out in town as large grey shed. Fishing is one of the main occupations here. Done from their Longboats every year they try to fulfill the quota for the much appreciated Tristan lobster, and about twice a month deep water fishing outings are on when the conditions allow, catching enough fish to be distributed for all settlers.

To the Northeast, the black lavas of the most recent eruption on the island, the well-known 1961 volcano.
In the summer of 1961 the growth of a new volcanic cone just North of the village made for evacuating all the locals to the potato patches, and onto the island of Nightingale the next night. The flowing lava started to approach the houses while the Tristanians boarded the Dutch ship Tsjisadane to evacuate the population to Cape Town. From there, the British Government brought them to England, where they settled at the so-called Calshot Camp. Two years passed and by then it was clear that the volcanic episode had ended, with the lava missing Edinburgh of the Seven Seas by just 100 meters, affecting only one of its houses. Most of them decided to come back, bringing the beginning of a new society managing to balance their old traditions, with the developments of the outside world.

Making the most of the fantastic morning, from dawn to the sunny lunchtime Europa sails by such an interesting and legendary location. Then the time ad arrived to set more canvas, brace, and take good advantage of the Northwesterly light winds to start making way towards Cape Town. The last leg of our voyage, where the trainings and talks will be more centered on testing the knowledge of the rig and training skills and teachings to introducing concepts of the traditional celestial navigation. Work with charts, positioning through dead-reckoning, use of the sextant, getting acquainted with the stars, and how to use them to navigate, all are going to be on the menu from today onwards.

A backing breeze to become more Westerly made for sailing almost downwind in the late afternoon, like that most of the fore-aft sails can’t help on our progress and they are stowed away. But it was just at the evening change of watches when the forecasted southerlies all of a sudden started blowing. With them, several squalls start popping up on the radar before sweeping over our track leaving behind rain and wind shifts.

Easy good sailing at the beginning, over long gently rolling seas was about to become the start of a rough and tempestuous ride once more.

A nice picture of the island and the place. I;ve been following the ship as a Klabautermann since it,s underway because unfortunately I can,t be on board myself