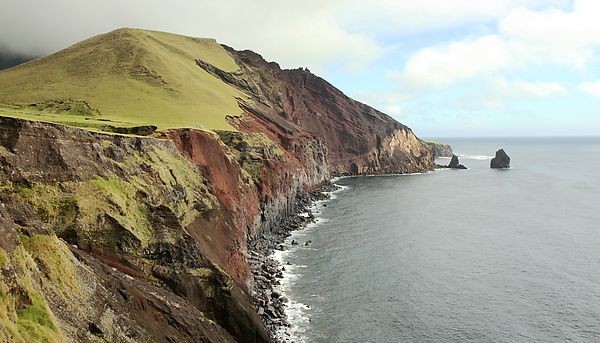 This is the story as told to me on 6th April 2015 by a local guide called Stan on my visit to Tristan da Cunha whilst sailing on Bark
Europa from South Georgia to Cape Town.

As you may know the whole population of Tristan da Cunha had to be evacuated in 1961 due to a life threatening volcanic eruption right beside their homes and communal buildings. They left in a great hurry leaving everything behind and traveling with just the clothes they were wearing.

The eruption and evacuation was such a big news item all around the world that by the time they arrived in Cape Town they were greeted by massed crowds along the whole of Cape Town’s waterfront. From Cape Town they were headed to England and the interest became to see how these remote islanders would cope with the modern life in the UK of the swinging sixties.

Then as is still the case today every Tristan Islander is entitled to four sheep, two cows, assorted chickens and geese which were all left behind in the evacuation of 1961. This left a lot of empty but fully furnished houses and free roaming assorted livestock in the fields around the Settlement.

At that time whaling was a big business in the South Atlantic, it did not finish until 1965 when commercial whaling was banned internationally. What you may not know is that the Russian whaling fleet was one of the biggest whale fleets in the world. The Captains and crew of the whale factory ships often took advantage of local opportunities to over come some of the hardships they found back home in the grim days of the USSR.

Initially you can imagine the Russian whalers thinking here was abandoned island with comfortable housing they could rest up ashore in and have a bit of R&R. The fact that there was this free meat supermarket roaming about outside was an added bonus. It also helped that they were experts in butchering and processing frozen meat. They had all the skills, technology and storage space to really get stuck into the islands livestock. In fact it is probable that the decimation of the Tristan Islanders flocks was increasing the whalers income substantially. The whalers returned to Russia not only with frozen whale meat but also with frozen beef, lamb, chicken and goose all of which they could sell on the black market!

Life back in England in the early 1960’s did not suite the islanders and many wanted to return to their beautiful life and island. Reports from passing ships suggested that the eruption on the island had either stopped or seriously died down. The Tristan’s put pressure on the British Government to find out if it was safe for the islanders to return home.

I can remember at the time how baffled, almost affronted, we were that anyone would want to leave England and return to such a remote and simple life. (Once you visit Tristan da Cunha you will fully understand why they would want to return.) In 1963 the British Government eventually bowed to pressure and sent a party of six including both scientific experts and islanders to asses the situation on Tristan da Cunha. When the exploratory party of six landed on Tristan da Cunha they set up base in the ‘Residency’ the house of the island’s administrator. They had not been there many days when a helicopter landed in the garden and out jumped some Russian’s who had expected to be making use of the ‘Residency’ for themselves. The ‘ruskies’ were surprised to see people emerge from the house and quickly popped back in their helicopter and where never seen again.

Thus endeth the secret invasion of Tristan da Cunha, so secret that not even the powers that be in the USSR knew about it!

Since 1963 the island has slowly developed and with a population ofnearly three hundred people has a wonderful way of life. There are good health facilities, an excellent school and a seismic monitor to warn of any potential future eruption.

I thought I would only ever go there the once, now I am planning how I can return to Tristan da Cunha as soon as possible!

Mid Atlantic on board Bark Europa.