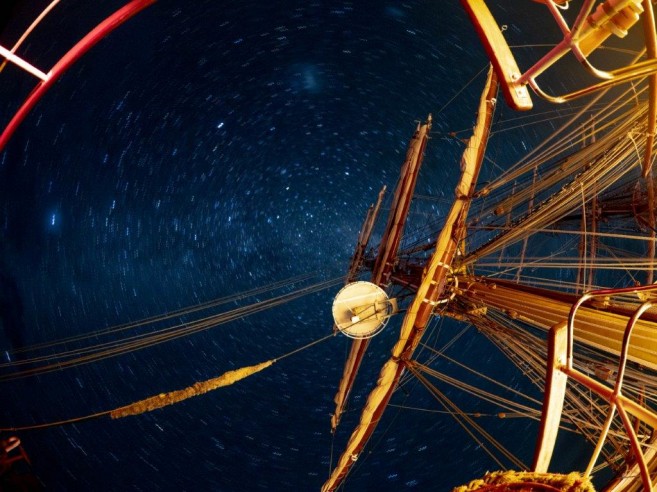 It's not just a trite line in a children's  song.  It's an astonomical phenomenon.  The stars twinkle.  Twinkling is  most noticible on bright stars, like Beetlejuice.  When Beetlejuice, one  of the limbs of Orion, is low in the sky, he flashes bright white, red,  and green really quickly.  It's easy to mistake as a strobe on a plane.  My watch buddy and I shared a rousing game of "Star or Satellite" after
seeing the strobe pattern.  Tonight I noticed the strobe effect on many  other stars, even the dim ones.  Stars look white overhead stars because  there's little interference in the atmosphere to scatter the light to different colors.  Stars closer to the horizon (within ~25°) appear to flash because they're travelling through more atmospheres and have more particles to scatter off of.  More accurately, they travel through one atmosphere (the Earth's) but it gets thicker the closer you get to the horizon.  This is also why the sun turns the sky fun colors when it gets close to the horizon (sunrise and sunset).

The other thing that becomes very apparent when stargazing in low light pollution is how many shooting stars there are (technically actually falling space debris, but that's harder to romanticize).  I went 23 years of my life without ever seeing a shooting star.  My first time stargazing in the middle of the ocean (in the Galapagos) my companions assumed there was a meteor shower: we saw five shooting stars in the span of our hour on the beach.  My first time stargazing on Europa I saw two in the span of ten minutes.  It seems as if there are lots of shooting stars but that high levels of light pollution don't permit them to be seen.  Alternatively, maybe being away from the pressures and distractions of everyday life has made me better at seeing.  Either way, I'm eager to do more gazing up on this voyage.

Stargazing in low light pollution is an amazing experience; I highly recommend it. It's hard to appreciate how many stars there are until you see for yourself.  The black spaces that look blank between the stars back home are actually patterned with a dense blanket of stars. For those of you who aren't eager to get sea legs, there are plenty of  dark sky parks on land.  There's nothing like gazing up and seeing the Milky Way and thousands her bretheren above you.