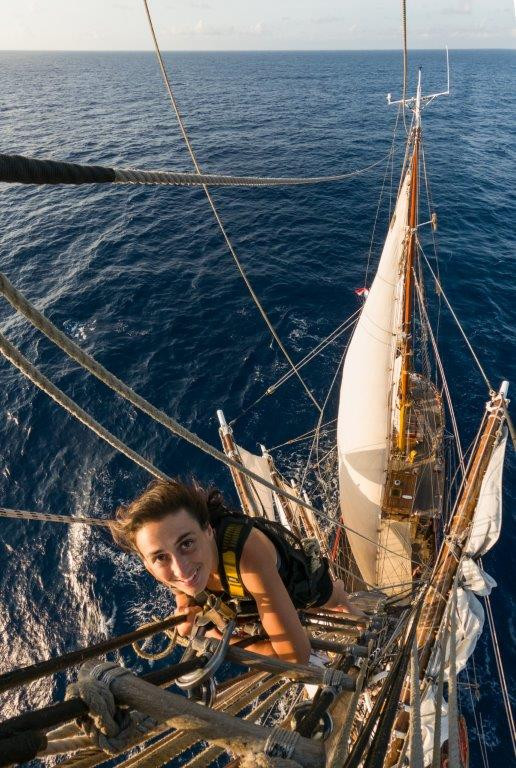 After Neptune’s and his court visit on board, now one,
then two Great skuas started to follow the ship. Sure the smell of the
secret potions and rotten fish brought on board by them to initiate the
Pollywogs to his kingdom has something to do with it.

The largest and more powerful of the predatory northern skuas, breeding
in oceanic islands all the way up to Spitsbergen, but dispersing
southwards from August onwards, seem to enjoy flying with us and look
around the decks with interest flying on several occasions right above
our heads in the Poop deck.

Neptune -borrowed by the Romans from the Mythological Greek god
Poseidon- sure is the venerable god of the sea and water, but also from
earthquakes, like the tremors he leaves behind as a result of his
admission and baptism rites… and the mess after them. His visit on board
ended up with a clean up that lasted until the evening, when an
impressive full moon rose at the East while at our Starboardside we
could enjoy yet another beautiful sunset.

Anyway, party, mess and all, Neptune is always welcomed on board “his
brother’s Zeus ship, the Europa”, which proudly carries a figurehead of
him, transformed in a white impressive bull, courting the princess of
Tyre Europa, offering her a ride to Crete, where she bore him three sons
(Minos, Rhadamanthus, and Sarpedon).

From now on, we will be sailing in the Southern Hemisphere. Not just
this but also the autumn in the Northern Hemisphere has transformed into
Spring.

The part of the earth that is directly aligned with the sun, receives
the most heat. The poles, being at a very flat angle, receive the least
heat. As the year progresses and the earth rotates around the sun, it
tilts on its axis. This tilt changes the area of maximum heat absorption
from the Northern Hemisphere to the Southern and back again—hence our
seasons.

On board the switch of hemisphere and season is welcomed by starting to
add again more canvas to our rig. Once the electrical system of the Main
Skysail Mast has been checked and overhauled, is time to hoist it, rig
its yard and bend-on the sail. A process that sure will take a couple of
days involving permanent crew from both watches.

All happened today while sailing nicely well up the wind, enjoying the
fair SE-ly breeze. 97nm done during the last 24 hours in a good 205º
course, making a total mileage sailed from Canary Islands of 2063nm.