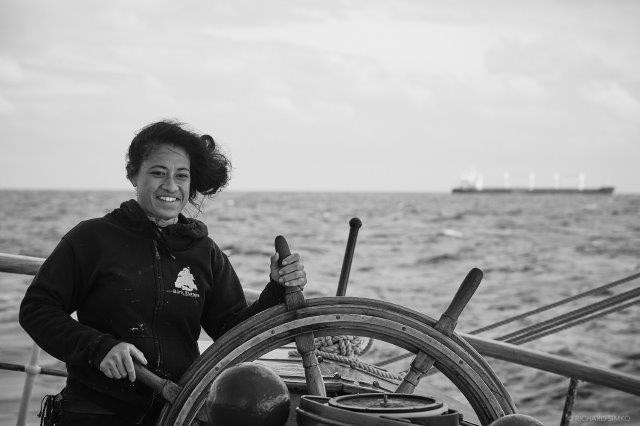 Chasing the wind. This could describe my sailing experience during the ninth week of our voyage. Compared to the old days of sailing we have weather reports at our disposal, but we cannot rely on them 100%. After all, weather forecasting is not an exact science. It is what it says it is, a forecast and it may or may not be right. The methods developed over the years have gotten more sophisticated and generally better, but at times they fail. Maybe not completely, but two consecutive forecasts about the same period are rarely exactly the same. The forecast tends to get more accurate as the forecast period is nearer in the future. That doesn’t help if you have to make strategic decisions based on situations days in the future.

There were several high pressure systems developing over the North Atlantic that could directly influence our progress. Mid-week, we were sailing almost straight east, but ultimately even though we would end up in an area closer to the coast, it would have no wind. On the other hand, behind us in the west, another high pressure system developed, moving in the same easterly direction and speed as we did. It promised to bring westerly winds on its northern edge that could help us get home faster. And here is the dilemma. What do you do in this situation?

Continue sailing in a somewhat favourable direction, knowing you end up in a “dead space”, or turn around, sail a little more away from your intended destination, hoping to catch better winds that should eventually bring you closer and faster home. We did the latter, wore the ship and turned towards the west. As crazy as it sounds, it made sense.

It was a gamble but as we moved closer to the area where the westerlies should be, we ended up in the centre of the high and the westerlies close to the north were about to disappear from the weather forecast, so we would end up in a “dead space” which we wanted to avoid in the first place. This was not going to work and it became clear that this way, we may not meet our arrival deadline to Holland (yes, we have a deadline around 24th June as Sanne has an important exam end of June).

Use of the engine was discussed several times before, most notably when we were stuck at 21° latitude South and in the Doldrums. Those times we kept sailing and eventually the long awaited winds came around not needing to touch the engine at all. Not this time though. Considering all circumstances and the relatively calm seas that favour motoring, we turned on the engines for the first time (not counting the man over board drill). A happy moment for some and a little bit disappointing for others. But even to those in favour of motoring from the start, it felt somewhat sad. We were really hoping to make this trip fully under sail from start to finish.

The air temperature has dropped significantly this week with. The wind is colder as well. It is not that refreshing breeze from the tropics that we enjoyed, but rather a chilly reality that makes us dress up more, especially for helming. Putting on shorts and t-shirt for the night watch is not enough anymore. Although the sun brings much welcomed warmth during the day hours, a prolonged stay in the shade requires an extra layer of clothing. We noticed a rise in the sea traffic this week with couple of cargo ships passing by, some quite close to us. And then the icing on the cake, two yachts crossed our path. We had a shortvconversation over the radio with the crew of a Spanish, privately owned yacht, Espiritu del Xarey, the first chat to other human beings since wevleft Ushuaia. Such a small and normal thing got us very excited. Many ofvus stayed on deck, observing the yacht with binoculars as she slowly
disappeared behind the horizon as we continued our “wind chase” towardsvthe west.

There was another kind of “traffic” to be observed on the ocean surfacevas well. A new species we haven’t seen before on this trip, the AtlanticvPortuguese man o' war (Physalia physalis), also known as the man-of-war, blue bottle, or floating terror. It is mistaken to be a jellyfish but unlike jellyfish, it is not actually a single multicellular organism but a colonial organism made up of specialised individual animals called zooids or polyps. Its venomous tentacles can deliver a painful (and sometimes fatal) sting. Every now and then we can spot some floating in the water. I guess we won’t have a dip in these waters.

We had to start week 10 with the rumble of the engines, luckily we didnt had to use them long. We continue our way again under sail, they way we prefer it, propelled forward by the wind.

It must be a relief to Eric and you all to have the right course finally. And to be able to stop the engines again. Keep courage. Ineke