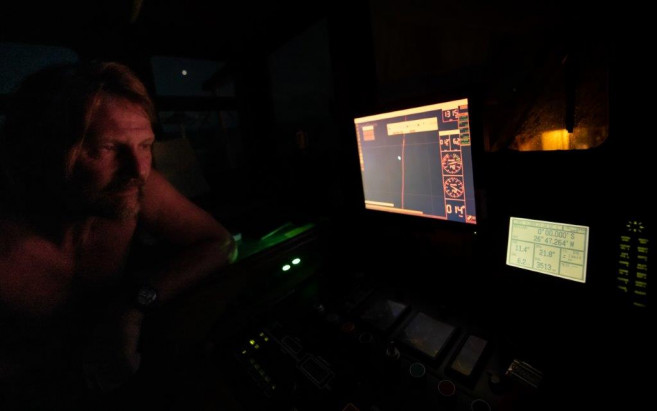 This week we reached a major milestone. An imaginary line that we crossed during the evening hours on 5th of May put us on the same hemisphere as our home port in the Netherlands. After 6 weeks on the sea, we crossed the Equator. Sometimes it felt we’d never reach it.

Being held back by weak winds for days left us frustrated, but then, after the wind finally picked up, just in the matter of few days we covered almost 17 degrees of latitude all the way to Equator. It is one of the five notable circles of latitude on Earth, the other four are the two Polar Circles: the Arctic Circle and the Antarctic Circle; and the two Tropical Circles: the Tropic of Cancer and the Tropic of Capricorn.

As you probably know, the Earth is not a perfect sphere. It bulges slightly at the Equator. This bulge is the reason why Mt Everest is not the highest mountain if measured from the Earth’s center. That title belongs to Chimborazo, (6,263m) in Equador. But I digress. It was a joy to see the number dropping so fast. As the latitude came close to zero, we gathered in the wheelhouse and watched it happening on the radar. Our eyes were glued to the screen with the GPS coordinates. For a fraction of the time interesting things happened. At the moment of crossing, people in front of the ship were already in the northern hemisphere enjoying the spring while the helmsman was still in the south in a
completely different season, autumn. Of course the Equator crossing comes with a ceremony, an initiation rite for the sailors that never crossed the Equator on the ship before.

The tradition may have originated with ceremonies when passing headlands, and become a "folly" sanctioned as a boost to morale, or have been created as a test for seasoned sailors to ensure their new shipmates were capable of handling long rough times at sea. There are four of us on board that never crossed the Equator but at the moment the ceremony is postponed for couple of days.

Our lovely galley crew Gjalt and Emma also finally got their well deserved day off. A lazy Sunday on deck in style of a Mexican holiday helped them to recharge some much needed energy for the upcoming weeks. That didn’t mean the rest of the crew stayed unfed. Our lovely ladies took charge in the galley and in true Mexican style; with a big smile they served us a very delicious Mexican food. Their outfit didn’t stay behind the food in terms of quality:) Good things that happened this week didn’t stop there.

I witnessed four engagements since I started to sail with Europa. This week that number increased to five.
Congratulations Mille and Greg. An evening glass of sparkling wine after the watch handover sealed the deal.

After the Equator crossing we enjoyed another day of good winds. It seems we are in a busy trading route. A couple of ships crossed our path recently. Also another Dutch sailing ship Tecla is just 300 nautical miles away from us. Cargo ships were the only signs of any human presence or life for that matter. Even wildlife is scarce around here. A lone bird here and there. Some dolphins are also spotted. But the
wildlife sightings are not as common as at the beginning of the trip.

Then one day we observed a jet plane flying by high in the sky. After six weeks on the sea this is first human activity we see other than cargo ships. Interestingly, after this long seclusion from the rest of the world and all the things that are currently unfolding everywhere a simple sight of a jet plane brings so much joy and even morale boost to the crew.

For the most part the last couple of days, we enjoyed real tropical weather full of sunshine. Now we reached the dreaded Doldrums and we are again at a standstill. Frequent squalls with rain replaced the hot tropical heat. A few days of easy sailing with minimum changes to the
rig ended and we are busy on the deck with frequent sail-handling drenched in the rain trying to outsmart the wind and get out of this calm area as soon as possible. Our hands are getting rough again taking a beating from pulling wet ropes regularly. Washing your face with these hands feels like rubbing it with sanding paper. Whatever it takes to get some wind into the sails and move closer to our destination (or out of Doldrums), we happily do. Being on the northern hemisphere feels good and after all, we passed the halfway mark of the journey a few days ago.

I sympathize with you. Keep courage