Out here, except in bad visibility, we have unlimited views all around.
There is however this sort of line where the sky meets the water, called
the horizon. The horizon is where mother Earth limits how far we can
see, at least if something is not poking out above it. If we stand at
the helm, our horizon is about 4.3 nautical miles, or roughly 8km away.
If a passing ship has its bridge at 40 metres above the water, we can
just see the parts of the ship above that level at a distance of 24km or
12.9nm. The lower part of the ship will be hidden behind the horizon. We
haven’t had a lot of other ships in sight, just two or three since
leaving Ushuaia. We have seen plenty of them by electronic means, on our
AIS and linked to it, on our electronic chart, but they mostly weren’t
close enough to poke their superstructures above the horizon. All of
them were crossing our route on the busy shipping route between Asia,
around Cape Agulhas and the Cape of Good Hope, to ports in Brazil along
the Santos Basin.

Out here, in our limited view of the world, an area within a radius of
just 4.3 nautical miles and nothing conspicuous inside it, the most
obvious thing in our sight is Europa itself and the people on board.
Europa, the ship, tends to focus our mind on things to do. There is
always plenty to do. Time, conditions and daily use leave their mark on
any and all parts of the ship and at some point those aging effects will
have to be reset somehow, to make the ship last just that little bit
longer. Much of the attention of the crew is focused on that aspect of
sailing Europa. For the rest it is about staying alive, either
physically or mentally. The physical part being formed by our efforts to
keep ship and crew safe and sailing, the mental part by distracting
ourselves a little bit from the daily grind. For some by playing an
instrument or listening to music, for others by reading or watching a
movie and for all by interacting with fellow crew-members.

Looking outside the ship, there is really nothing to distract you
visually. Of course there is the ever-changing ocean and a dazzling view
of the universe above us, but the mind is free to wander. Those
wanderings take us beyond the horizon, to those parts of the world we
read about in our weekly news updates and the emails from friends and
relatives. The stories we hear are mostly not pretty ones, but there is
always a positive note as well, of how Corona could magically refocus
people’s minds on what’s important in the world. That surely won’t be an
easy thing, as many people in the world only have a limited view of the
world around them and they may not even know it.

When I was a little six year old kid, I had one of the most powerful
experiences of my life, which I only recognized much later. It was
around Christmas time 1968, when the Apollo 8 crew flew around the moon
and made pictures of the Earth rise above the barren lunar landscape.
Those were the first pictures ever made by humans (not robots) of our
tiny little spaceship Earth against the backdrop of the vast and dark
universe. That famous “Earthrise” picture has been my desktop background
(on and off) since I have a computer. The twenty-seven astronauts who
have seen that distant view of Earth, all speak about how it made
national boundaries vanish, the conflicts that divide people seem less
important, and the need to create a planetary society with the united
will to protect the planet becomes both obvious and imperative.

My experience was repeated 22 years later, when the late Carl Sagan had
the idea of letting the Voyager 1 space probe make a picture of Earth as
it was leaving the Solar System. Making that picture was not easy due to
how close the Earth appeared to the sun from 6 billion kilometres away
and the result is somewhat abstract: a tiny one pixel-sized, vaguely
blue dot, caught in rays of lens-flare. It’s maybe not the somewhat
puzzling picture that drives home the truth about our existence here on
Earth, it’s what he had to say about it:

“That's here. That's home. That's us. On it, everyone you ever heard of,
every human being who ever lived, lived out their lives. The aggregate
of all our joys and sufferings, thousands of confident religions,
ideologies and economic doctrines, every hunter and forager, every hero
and coward, every creator and destroyer of civilizations, every king and
peasant, every young couple in love, every hopeful child, every mother
and father, every inventor and explorer, every teacher of morals, every
corrupt politician, every superstar, every supreme leader, every saint
and sinner in the history of our species, lived there – on a mote of
dust, suspended in a sunbeam.

The Earth is a very small stage in a vast cosmic arena. Think of the
rivers of blood spilled by all those generals and emperors so that in
glory and in triumph they could become the momentary masters of a
fraction of a dot. Think of the endless cruelties visited by the
inhabitants of one corner of the dot on scarcely distinguishable
inhabitants of some other corner of the dot. How frequent their
misunderstandings, how eager they are to kill one another, how fervent
their hatreds. Our posturings, our imagined self-importance, the
delusion that we have some privileged position in the universe, are
challenged by this point of pale light.

[...] To my mind, there is perhaps no better demonstration of the folly
of human conceits than this distant image of our tiny world. To me, it
underscores our responsibility to deal more kindly and compassionately
with one another and to preserve and cherish that pale blue dot, the
only home we've ever known. 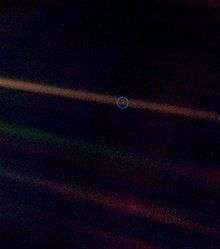 Good saying and yes we sould take better care for this world. My world on this moment is a little bit bigger when I follow the journy of the Bark Europa and that's nice. Thanks.