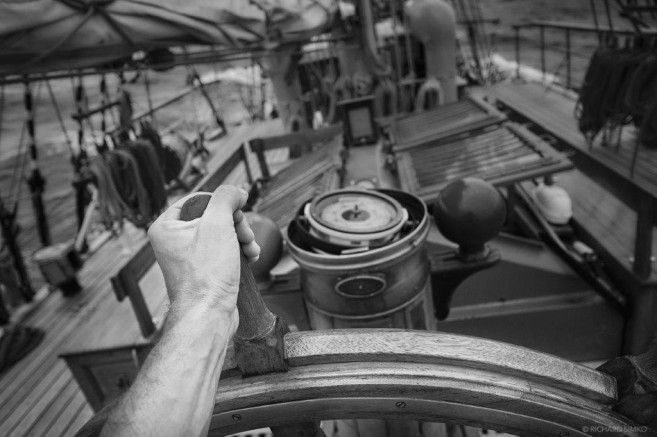 As we are coming to the end of the 7th week on the sea, Europa is firmly piercing the waves of the Atlantic Ocean in the Northern Hemisphere. After a couple of slow days in the Doldrums, we are on our way North again, although wind and a high pressure system above Northern Atlantic  pushes us a little too far to the west. We hope the wind turns around to a more easterly direction and we can steer the ship more to the north sailing around the centre of the system. That should eventually take us back to the right course for the Netherlands as we get more North. Progress is being made nevertheless.

As the “Doldrums period” is behind us, our sailing rig remains more less without change. Courtesy of stable winds. There is a striking difference in comparison to sailing in equatorial calms with light but unstable winds that require much more effort put into sail handling. Constant bracing, setting and taking down sails never ends. It takes an effort to readjust and tweak the rig to take advantage of the slightest sign of wind. Also we have to quickly react to any squalls coming our way. Some squall clouds in the Doldrums are spectacular. A wide stream of rain
shower is forming a trunk of a huge “tree” with thick layer of clouds on top of it branching out in all directions into the final shape. Usually the squall comes with a notable change of wind speed and direction but our Doldrum squalls often come with the rain only, while the wind remains rather calm. It was a slow going for a while. Even not going at all which also allowed us to refresh our bodies in the Atlantic waters once again, perhaps the last time. We felt quite jealous while watching cargo ships passing by in rather high speed fashion (compared to us) as we helplessly stood on the deck staring at flapping sails.

I have to take back the comment from my last blog about “dead sea and lack of wildlife. Three Willson storm petrels proved me wrong as they got confused by ships lights in the dark and ended up on the deck. We kept them in a basket covered with a towel in a dark and quiet place and set them free in the morning, unharmed. These little fellas are pretty amazing, spending most of the time in the open ocean coming to land only for breeding. Tough little guys.

I’s been more than week since we crossed the Equator and the eagerly awaited ceremony was postponed due to illness of some crew members. A much appreciated “Doldrum Appreciation Day” (see Eric’s post) helped everybody to get back on their feet and finally get on with the Equator crossing ceremony mumbo jumbo.

It’s been an afternoon full of fun, stinky fish, disgusting drinks, dirty liquids of all sorts and colourful costumes and makeups. I am happy to report that all four pollywogs have been accepted into Neptune’s Kingdom and can proudly call themselves Shellbacks. Since we love celebrations and cakes so much, we also celebrated Brian’s birthday with a whole set of presents, mostly bags. Rumour has it that Brian loves bags. Happy birthday Brian.

thanks again, Richard for your report. It brings back so many good memories.Good to hear you have good winds to sail now, although the direction could be better.