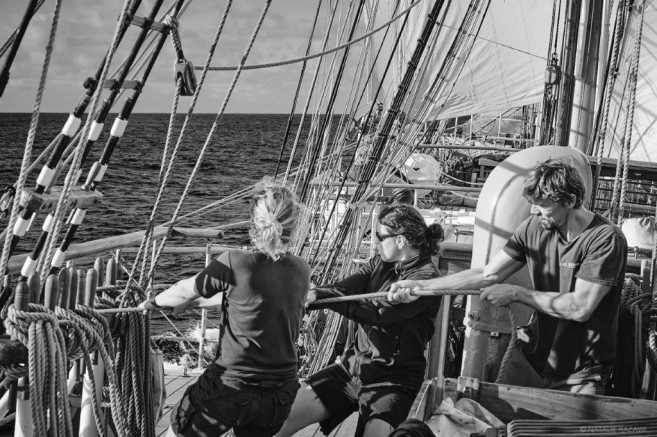 Another week has passed. We entered the new one listening to the roaring engines that we finally engaged after a long deliberation. Not even a day passed, exactly 22 hours and we set sails again as winds picked up, and for a while it seemed we got a good push ahead.

But the winds were not cooperating and the weather forecast showed light winds for a week. The seas became calm, a good condition for motoring as the ship doesn’t have to battle the swell which would slow her unnecessarily down and ultimately make us burn more fuel. Occasionally, when winds picked up we set some sails again to help the engine with a little bit of a push. It proved to be a frustrating experience at times as the wind kept making fools of us. Setting all the sails and then taking them away and furl them all takes a time. We spent one entire watch doing sail handling and then being aloft. In a strange way, it was frustrating but also a satisfying experience.

On the one hand we didn’t get the progress we wanted and it kept us away from maintenance work that is still ongoing. On the other hand, the fun of sail handling and spending time aloft gave us a little bit of a real “sailing workout”. We haven’t had much of it lately. Ultimately, after a few attempts to engage wind power, we just motor without sails.

We are surely in the midst of a busy area. The number of vessels popping up on the AIS increased, with a few of them passing by in relatively close proximity. Unfortunately, the amount of rubbish we spotted floating on the water surface increased as well. The Portuguese man o' war (Physalia physalis) is still frequent in these waters. Some of the crew members experienced first-hand, the stinging power of its tentacles as one of them got tangled in a rope and got pulled accidentally on the deck. Nothing serious though. The whole feel of the Northern Atlantic is quite different compared to the ocean closer to the Equator. The water seems to be more murky. Temperatures were colder for a while than the normal average in this area. Quite often we grab our foul weather jacket when standing on the helm. It can get pretty cold there. Especially during the night watch, when the wind picks up, the chill can get to the bone when not dressed properly.

At some point we were about 125 nautical miles away from the Azores, which is the closest we have been to any land since we sailed near the Falklands. That brought us also an increase in wildlife. A number of common dolphins pop out often checking out the ship. Unfortunately, the Europa is too slow for them so after they checked her out, they disappear quickly. They prefer much faster vessels with speeds about 20 knots that we cannot reach. We spotted some pilot whales, tuna jumping high above the water surface, arctic terns, Wilson’s storm petrels and some other bird species. At the time of writing this blog we are still about 1500 nautical miles away from our destination. So close, yet still so far. We tell ourselves it is like crossing Drake Passage 3 times and we are there. It sounds simple, but the ocean and the weather can be very unpredictable. Also with the motoring we have to be careful. The amount of fuel left is limited and we still have to run the generators. A lot to think about when the right decision has to be made.

As we are getting closer to our destination, we notice the change of the feelings and emotions among the crew. It is a feeling of uncertainty we are going to face when we arrive. Nobody aboard has any experience with the new “world order”. Some of us are on the ship since beginning of February and that is a very long time. It far exceeds any quarantine imposed on people by their governments and health organisations. Sadly, after all this time spent on the sea, far away from our loved ones, a number of us will still have to spend two weeks in quarantine before we can actually make it home. We also have a hard time imagining how social distancing works in real life. Jokes are frequently flying around about practicing social distancing on the ship while trying to sail it. In all seriousness it would be close to an impossible task. Once we reach port, that is the new reality we all will be forced to adapt to. We are regularly in touch with the office. They are busy at work preparing for our arrival and also trying to figure out how to get us home.

As of now, many countries are still on full lockdown. As things are continuously evolving, the situation may change by the time we arrive and as I mentioned we still have to cover at least 1500 nautical miles. Two weeks? Three weeks? Guess 🙂

Hello crew, Your last miles by now. By the time you make your landdall I presume you will find the lockdown fairly loose. Dutch motorways by now are nearly as busy as before and people are adapting to the new 1.5 meter society. I hope most of you will be able to fly home the next few weeks. Though I hear Spain is still tough on the rules. Sorry, Maria. Have a good voyage all of you en welcome “home” in the near future Rudi von Bartheld

The last miles!! Strange that some of you have to go in quarantaine. But the rules are changing weekly. In "normal"days I would be on board now. A strange idea. Stay strong qand safe. Ineke