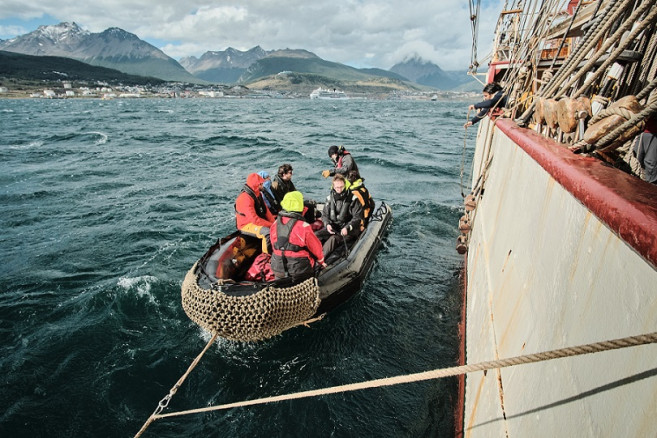 The Bay of Ushuaia sees the Europa laying at anchor since yesterday in the afternoon, after a first day in port on arrival from her last voyage. With the increasing number of ships engaged in the Antarctic tourism, plus the fishing and container shipping fleet, it becomes difficult to find a spot alongside the pier for a few days in a row.
As usual, weather in Ushuaia is as changeable and variable as it can be. A sunny calm morning becomes a gusty midday. Snow falls up the mountains, rain at the lower parts, just to clear up in a few minutes, let the sun pass through for a while and then start all over again.

Europa’s sees the last preparations for the trip, and in the afternoon, amidst the moody meteorology of the area, embarkation time arrives. Before making our way to the commercial port of Ushuaia we all had a bit of time to enjoy the so called to be “Southernmost city of the world” and its surroundings. From there, the ship’s rubber boats picked everybody up. A wet bumpy though short ride across the windy bay brought us to the ship and soon we were climbing up the ladders to Europa’s decks.
Embarkation procedures followed. Afterwards there was time enough to get acquainted with each other, the cabins and the ship that will be our home for the next weeks.

Traditional sound of the ship’s three bells called then for a gathering with everybody. Captain and her crew welcomed us on board, the crew introduced themselves and also a few words were exchanged to give a general idea of the trip, some basic safety topics, all followed by our first dinner on board.

Day was not over yet. Before finishing our first exciting journey on board, the guides and crew took the late evening to start familiarising everybody with the ship and the duties necessary to run her and the watch system, the safety equipment and a practical walk around on decks and below. A way to get into the systems of the life-on-board before actually heaving anchor and sail tomorrow.

At what time? … we are still not sure. Wind forecast tells about a deep Low Pressure System rapidly passing along the Drake Passage, affecting the Southernmost Patagonia and Cape Horn with ferocious winds and big seas. Would be better to sit, wait and begin with the necessary drills and instructions to sail the ship while still in calmer areas at anchor. A few hours surely well spent before venturing South, where a great adventure lays in front of us. Sail the ship, join the watches, learn the ropes, steer her over the Drake Passage. Journeys at sea, and days of visits ashore in Antarctica. The sort of arrangement which on board a ship built 112 years ago, takes an enthusiastic crew and plenty of effort to put together.