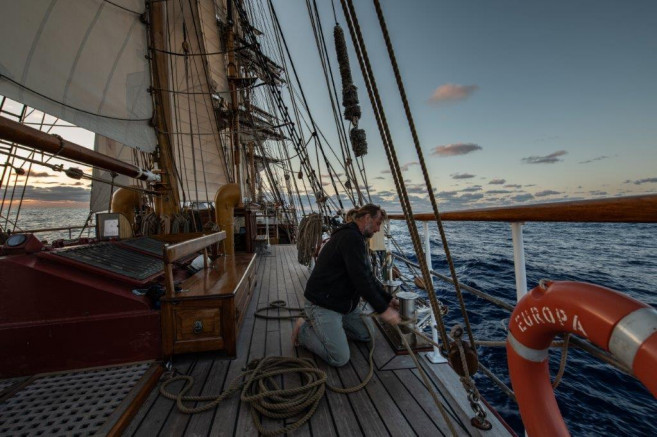 Fitted with 2 engines, 720 hp in total, and all modern equipment necessary to match modern regulations for safe ocean passages to remote areas as a sail training vessel, the 100+ years old Europa hull and her 19th century barque-rig, represents a synthesis of classical and modern sailing at sea. Like our present voyage: a long ocean passage that is taking us about three months along about 10.000nm of the South and North Atlantic, using all the strengths of the ship and her complement. The various updates written by some crew members and the ship’s log tell the story: a couple of months just using our canvas and power of the winds had brought us to an area with no chances for good sailing. Light head-winds made for hauling up and down of the many sails, both staysails and squares, trying to get the ship going in a desired direction, but days of motoring and motor-sailing has proven to be necessary to claw our way towards the Netherlands and not to lose a great deal of time.
On that fashion, during last week we got closer to land, from the middle of the Atlantic, the African and European shores don’t lay so far anymore. A couple of hundred miles west of the Azores, in failing winds, the engines enabled us to leave our northwesterly course towards Newfoundland and head straight for the distant English Channel. We make a steady progress whereas a pure sailing vessel would have to wait idle or wander around waiting for fair winds. A different approach to the ocean and timings, schedules and obligations.

Like that, taking advantage of all of Europa’s resources, we sailed as much as possible inside the time frame available to us during these difficult times the world is going through. But not just the crew and her sails are part of those resources but also the 2 motors that run our propellers, the opportunity to get daily digital wind forecasts and the accurate sea charts we possess, both in paper and digital. Combining those resources makes routing, planning and keeping schedules an easier
job than in the real sailing exploration days of a long gone past. Then, the greatest voyages were made under sail and only much later explorers started adapting their vessels to fit the first sea-going steam and coal engines, that were nevertheless less reliable and with less autonomy than the ones roaring in our ship.

Expeditions that sometimes lasted several years, spanning several continents. Times of game-changing cartographic and natural history achievements. Amongst others the well-known discoveries of Christopher Columbus, Ferdinand Magellan’s odyssey, Krusenstern’s exploratory and diplomatic trip around the world, the scientific circumnavigations of Alessandro Malaspina and Louise Antoine de Bougainville, William Bering’s and James Cook’s famous voyages, all faced routes that went
further on, into unexplored lands and seas not yet seen by Western eyes. In times when naval exploration carried the baggage of uncertainty and crews could never feel safe, navigating in waters that often where completely blank on the charts. We mustn’t forget their audacity to dare into the untold, and their courage to put up with the daily unexpected. Even in the earliest of the exploration ages they were sailing by dead reckoning, and so, without knowing it, they could be drifting in
undesirable directions or find themselves in a different position than expected. From then, the gradual application of the new discoveries and the unstoppable technological paths has brought us a world naked of those blank spaces, much safer travels, but some relentless souls miss the gripping attraction of the unknown. Formerly unknown lands, nowadays all mapped and winds to sail, now forecasted and daily available in digital format.

At the same time that we are earnest to explore and learn things, we require that all things remain mysterious and unexplorable, that land and sea be infinitely wild, unsurveyed and unfathomed by us because unfathomable. Henry David Toreau ´ Walden´ (1854)

Undisclosed coasts, islands and seas which discovery not just belongs to the famous names that made it into our history books. Even ancient sea going cultures, like the Norse about 500 years before Columbus, dared the cold northern waters in their voyages of expansion, reaching Greenland and the wild lands of Canada, using rudimentary navigation methods and relatively primitive vessels. Many other remote areas were first unveiled by brave sealers and whalers on their fearless voyages all over the known world.

For many years past, the whale-ship has been the pioneer in ferreting out the remotest and least known parts of the earth. She has explored seas and archipelagos which had no chart, where no Cook or Vancouver had ever sailed. If American and European men-of-war now peacefully ride in once savage harbours, let them fire salutes to the honour and glory of the whale-ship, which originally showed them the way, and first interpreted between them and the savages. They may celebrate as they
will the heroes of Exploring Expeditions, your Cooks, your Krusensterns; but I say that scores of anonymous Captains have sailed out of Nantucket, that were as great, and greater than your Cook and your Krusenstern. For in their succourless empty-handedness, they, in the heathenish sharked waters, and by the beaches of unrecorded, javelin islands, battled with virgin wonders and terrors that Cook with all his marines and muskets would not willingly have dared. Herman Melville. ´Moby Dick, or, The Whale´

We praise and remember them: explorers, adventurers, merchant traders, sealers and whalers alike. In these present days of modern sailing using the latest technology, ships fitted with powerful engines and tight schedules to follow, adhering to carefully drawn routes and systematic plans to accomplish their goals, a different perception of time, adventure, oceans and lands, has evolved from the old sailing eras.

During their (and in a way ours) prolonged journeys at sea, the outer world to discover and the oceans to cross were the main goal. But for long enclosed in the protective shell that represents the trusty ship surrounded by the seemingly boundless ocean, is not to forget another aspect that those long sea-going trips offer to the ones open to it: a fulfilment of the need to look and explore into our inner selves.

What is the meaning of great expeditions, with all the parades and expenses, but an indirect recognition of the fact that there are continents and seas in the moral world to which every man is an isthmus or an inlet, yet unexplored by him, but that is easier to sail many thousand miles through cold and storm, with five hundred men and boys to assist one, than is to explore the private sea, the Atlantic and Pacific Ocean of one’s being alone - Henry David Thoreau ´ Walden´ (1854)