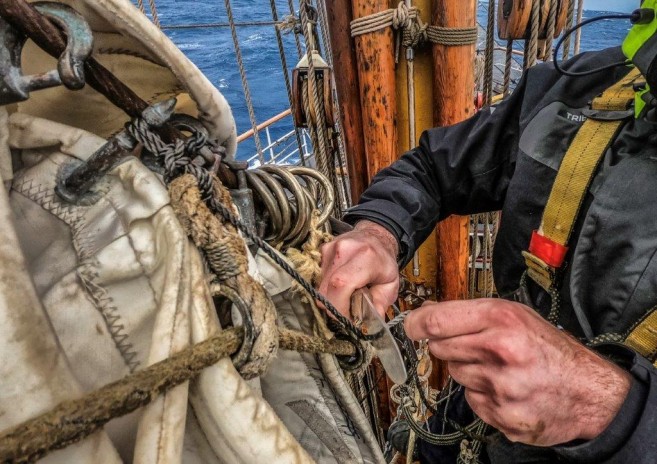 Leaving the South American coasts behind, wind increased and seas grew, making for the ship to start pitching and rolling. S by W winds up to 30kn and a change of course, now starting to sail on a more Easterly direction of about 140º to 150º, made for setting again Lower Staysails and the Spanker during the early hours of the day. Lack of fair winds and the gradually growing seas didn’t help to make good speed, and we kept about 3 to 4 kn overnight.

Yesterday we were  all still up and around, joining meals and talks, but today, already from the early hours, some couldn’t join the watches due to seasickness. Certainly the idea of suffering it throughout the length of the long way ahead of us hoovered over their heads, but sure soon we all will get used to the ship’s movements, while sailing the Meridional waters of the Atlantic. Part of the Ocean full of sailing adventures and history. The southern part of Patagonia was already populated surprisingly as early as 7000 years ago, but it was not until 1520 when Ferdinand Magellan reached the southernmost tip of the South American continent. From there he discovered and navigated a wide channel, which connected the Atlantic and Pacific Oceans, nowadays known as Straits of Magellan. This waterway was extensively used by other ships. The Golden Hind, under the command of Sir Francis Drake also tried to sail along the Straits in 1578 on his raiding trips that brought him around the world.

But he was blown off south of it into the ocean, finding the vast stretch of water nowadays named after him, where we find ourselves today and for a few days more before reaching Antarctica. Famous today for the rough waters of this Passage, Sir Francis Drake himself was also a celebrity in his lifetime. He has long been considered a hero by the English, being the most famous sailor of the Elizabethan Era. His success against the Spanish as a privateer captain was legendary. He was celebrated for fighting the Queen’s enemies over several seas and oceans. And as a privateer he gained celebrity sinking their ships and apprehending the treasures stored in their holds. Reaches that else would be used to fund battles and wars against England.

Of course this courageous view was not shared by their arch-enemies the Spanish, who remember him just as the most infamous pirate of the 16th Century.  Drake was despised by them, up to the point when the Spanish King Phillip II offered an equivalent of a 7-million-dollar bounty on his head. In fact, the truth is that he fell between those two contrasting worlds: following orders from the Queen during war state, but occasionally also targeting enemy ships over the seven oceans when there was no war declared, falling into outlaw piracy. After a legendary life, he ran into mixed success during his last assignments, until his time was ended by an unexpected enemy that he couldn't overpower: dysentery. He died on the 28th January 1596, at the age of 55. He was buried at sea in a lead coffin off the coast of Portobello, Panama.

Drake’s legacy has since been legendary, including rumors about buried treasures, wild encounters with native Americans and his famous circumnavigation of the world, that was accomplished as a byproduct of his pirate activities over the seven seas. Due to his discoveries along the American shores, England hold a preeminent position on establishing colonies in North America by the early 17th century. For us, his name will always remain in our minds as the person who first endured the stormy seas South of Cape Horn, opening the route that in the future would bring other explorers to the Antarctica. Now including us, sailing the Bark Europa over the cold and rough waters on the Passage that bears his name.

Here, the usually howling winds and foul weather, deserve always a good look and a follow-up over good forecasts, before and while venturing into his waters. Unlike in the old times, and thanks to the nowadays advanced technology available, we all have the invaluable possibility of studying the weather forecasts. With this tools Captain Janke together with her Mates Finn and Merle, have been planning our routing accordingly. Like this, the Southerly winds seem that will keep blowing for the next few hours, most probably making for the use of our engines, with some sails set to help the steering and stabilizing the ship.

Curiously enough, the invaluable meteorology specialty of weather forecasting was invented and developed by the same Fitz Roy, who also discovered and mapped the Beagle Channel, travelling around the world with Charles Darwin on board. The interest on meteorology grew in him because of his naval career and life at sea during the 19th Century. He knew from his own experience sailing the world’s oceans the value of advance warnings of storms at sea and developed great interest on doing whatever he could to help mariners. He designed and used the first weather-stations, creating a system of meteorological warnings including the first daily weather forecasts as well. Much more evolved and complicated nowadays, but nevertheless thanks to him and his pioneering ideas in this field, today computer simulations give us accurate information about the weather systems all over the world. On board we can also get this information, through downloading wind forecast files, of great importance for safe sailing and routing of our trips.

And like this, having downloaded the wind forecast for the following days, it seems like we will have to keep enduring the winds with S-ly component for the next half day or so. Afterwards fair W-lies are predicted, that will help us on our progress towards Antarctica. For the moment the wind kept shifting between SSW, S, SSE 26 to 30kn.
Besides this general regime, we have been hit by several squalls, passing quickly over our heads with their associated strong gusts and occasionally rain and hail. All this over a highly variable weather conditions, varying from overcast skies to sunny whiles, as the Europa pitches crashing against the short and steep S-ly swell, that actually decrease our speed and make for an uncomfortable ride.
While braving those circumstances, a solitary Minke whale pay us a visit, surfacing a couple of times next to the ship before disappearing into the blue. These whales are widespread along both Hemispheres. In the North just one species is present, but here in the South two of them co-exist. The more common and usually seen in higher latitudes Antarctic Minke whale, and the scarcer and mainly Sub-antarctic Dwarf Minke.

The afternoon brought an increase on the wind and in the number of squalls affecting our progress, making for furling the Middle Staysails and change the larger Desmond for the smaller Aap, more suitable for stormy weather. And facing one of those sudden blasts, gusting over 45kn from a general wind pattern of SSW-ly blowing 25 to 35kn, Dekzwabber ripped apart and had to be bended off, being quickly replaced by a small storm sail. Until the end of the day and during the night we kept steering on a SE-Se-Ly course now motorsailing under reduced canvas, not to gain too much distance Eastwards, and waiting for the wind shift to come in the next hours, to a more favourable W-ly.Nevertheless, while braving the confused waters of the Drake Passage, the conditions still allowed to begin with the lecture program put together by our guides and crew. During the whole trip they will try to integrate talks about different subjects, from sailhandling and seamanship to Natural Sciences and History, passing by the always interesting topic of Photography.

Our guides usually like to start giving some explanations about the Seabirds of the Southern Atlantic, as many species had already been seen since departure from Ushuaia. To accommodate everybody interested on the different subjects, the lectures are always repeated twice and at times that work with our watch system. Once introduced to them, now sure will be easier to identify the numerous Giant and White-chinned petrels that fly with us, together with the different albatrosses that can be seen.

Today the common Black-browed were around accompanied by some of the huge Royals and Wandering albatrosses, that with their wingspan of about 3.5m, glide elegantly over the swell enjoying the strong winds. Favourable conditions for them, better than calm winds and flat seas, as then they would have to flap their enormous wings spending lots of energy. In the afternoon we were introduced to the Penguin world, just to make ourselves ready for what is to come as soon as we reach Antarctica and start walking around Gentoo, Chinstrap and Adelie penguin rookeries.

Before that, still a couple of days venturing in the rough waters of the Drake Passage lay ahead of us. So far we have sailed 154nm since departure from Ushuaia, and 80nm during the last 24h, not all in the best heading towards Antarctica. We all hope for a quick improvement on the conditions in the next hours, to be able to adjust the course and set sail towards the South Shetland Islands, our first scheduled stop in Antarctica.