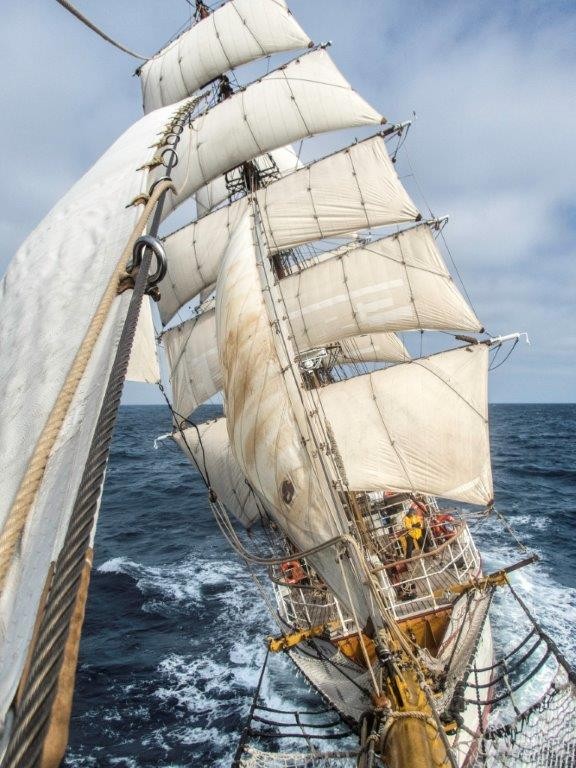 The “Furious Fifties” didn’t disappoint the ones wishing to figure out why those latitudes are called as such. Last afternoon and evening’s raging winds related with a depression slightly north of us, have been growing swells that had been shaking us since then.

With decks still awash but on decreasing winds, the day started setting the Spanker as a replacement of the smaller Try-sail rigged to withstand the stormy conditions. But now the wind just blows at about 20kn and had backed to SW-ly. Steering is now more northbound and is still done from the wheelhouse and just a handful of voyage crew is around taking turns for the lookouts and standing-by to give a hand to the permanent crew setting sail. Still during the dark hours of the new day, the situation is good enough to set the Top Gallants, pulling ropes on a deck that is washed once and again by the swell crashing against our hull or coming over the rails.

As the wind eased down, Europa gradually change her setting from “storm-mode” to the regular sailing. Storm sails are replaced by the larger ones, like this Fore Top Mast Staysail comes back together with the big Dekzbabber over the Sloop deck and the small Aap is changed for the Desmond on the Main deck. Then Fore Course is clued down as well. As the hours pass, the big seas lessen at the same time than the wind. Time for start setting all our canvas under the direction and attentive look of our Captain and Mate. Starting by clueing down the Royals and following with Gaff Top sail, Outer Jib and the Staysails on the Mizzen Mast. The last sails to hoist were the Staysails on the Main Mast plus the Main Course. By then the wind blows at a steady 16 to 17kn, becoming W-ly and the sun start shining, breaking through the clouds that had been covering the skies during all morning.

The change for the better on the weather, wind and sea state along the day is related with the quick pass of a High-Pressure ridge. This increasing on Barometric Pressure is following the Depression that hit us yesterday and made us reduce sail and wildly roll on the rough waters of this Southern Ocean that soon we will leave behind to enter into the South Atlantic. For our purposes let’s consider the Antarctic Convergence Zone as a delimitation between those water masses. Meaning that soon we expect the surface water temperature to rise from the 4ºC we are having now, to over 6ºC. Keeping track of it and of our progress, that will happen approximately when we start sailing on the “Roaring Forties”, coming off from the “Furious Fifties”. As those denominations reflect, we sure still have some wild seas to cross on the way to Cape Town. For the moment our next planned stopover at Tristan da Cunha is 1225nm away. Behind us lay South Georgia at 238nm.

Last 24h of sailing (counted from noon to noon) gave us a good shake first on the high seas and stormy winds, then a weather improve and finally great sailing, as an example of the variable conditions of the southern cold water seas. But all an all, during this changeable day, we made a worthy progress of 165nm at an average speed of 6.9kn.

Enduring yesterday’s wild seas, the lecture program from our guides was postponed, but today’s improving conditions made for spending some time getting more information about Kelp and the spectacular clouds we have seen during last week in South Georgia.

After the morning coffee-time, some of us gathered in the lounge for a continuation of the Giant Kelp stories. After having had close encounters with it during all our landings, now is time to learn a bit more about this amazing algae and its growth, creating thick underwater forests. Today we got deeper into how it has been spreading along the temperate waters of the Pacific coasts of South America and all Subantarctic islands. The Kelp biological structure and its reproductive cycle make out of these plants a truly conqueror of new habitats that comply with its requirements of water temperature, salinity and nutrients. Being a very old group of algae, the world distribution of the different populations of the species has been greatly affected by changes on the continental configurations and Glacial periods.

In the afternoon there was time to receive some more explanations on the weather and how it shapes the clouds. As an example, the stunning skies we had on 26th March, when Europa’s barograph recorded a steep drop in air pressure. A strong depression approaching was forecasted to pass straight over our heads, and indeed the pressure dropped from around 990 hPa to about 960 hPa in 12 hours. This resulted as expected in strong winds of up to 50 knots which started blowing over the South Georgia mountains and were forced to move up to pass over the mountains and then move down again. The clouds in the air show how the forceful winds are with spectacular patterns over Grytviken, while Europa anchored safely hidden behind the Paget mountain range. Later on, while cruising in Ocean Harbour the strong winds prevailed at higher altitudes and treated us to a display Lenticular Clouds, spectacularly lit by the setting sun. These cloud formations are created by really strong winds that are forced over the mountains and once a steady state is reached, a wave pattern becomes visible in the sky. They grow where the air rises quickly and condenses and disappear where the air sinks again. Since the motion is related to the mountains, the clouds stay in one place and are not moving with the wind we can feel in the lower areas.

Out at sea where we are sailing for the next week, different weather and cloud patterns can be seen, different winds can be felt. Now its blows have to drive us along the Southern Ocean, for this Captain and Mate must keep a sharp eye on the available forecasts to sail as much as possible to reach the remote Tristan da Cunha island.

For the upcoming hours the winds are forecasted to keep shifting. As the relative short period of High Pressure pass by, so the winds change as well. For the late afternoon we experience already the 15 to 20kn of fair breeze veering and becoming N-ly first, then NW-ly, and decreasing.

Now that we are back on steering duties under those benign conditions, we are told to keep the Europa Full-and-By, gradually bracing sharper to Port Tack and keeping the sails full, sailing following the wind. Like this, we end up steering Eastwards, coming from the
Northeast course we were keeping until now. But the weather forecast predicts another shifting on the winds for the first hours of the next day. Soon they will increase once more to over 30kn, baking to W-ly or WSW. But by now we are all aware of how this treacherous ocean tries to surprise us with its dramatic changes on climatology. Supposedly being more trained on Sail-handling and with our sea-legs rapidly coming back after a week of landings at South Georgia, we sure will face with more confidence the upcoming weather changes.

I have been following you sailors from the 3rd of March onward, mainly because one of our star programmers Mark de Ronde is crewmember for this trip. But being an old Dutch Navy guy, i just love the beautiful stories of your voyage. I have never properly sailed on such a beautiful vessel as the Bark Europa but have been around on all the oceans of the world on several occasions in my navy-time. I cannot help being extremely jealous of you all :-). What a life changing experience this must be. Happy sailing!