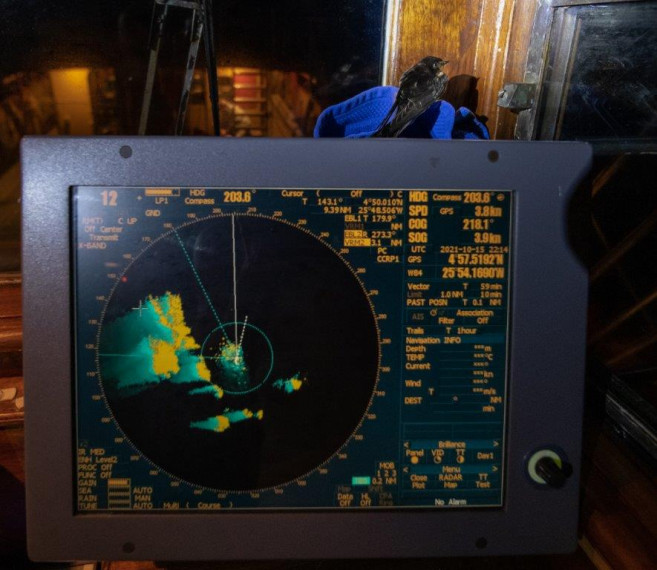 A great sunrise followed by blue skies and a shining bright sun. Temperatures rising by the minute. Jobs and maintenance taking their time, the crew being helped by some voyage crew, while others prefer to bask in the sun or hide in the shade for a nap. All just wearing shorts, tank tops or T-shirts. Shoeless feet for many when working aloft, sandals on deck.

Captain or Mate having a close look at the radar, capable of indicating where the rain is and therefore the wind. The lookouts searching for the shade of the sails to hold position, helmsman taking it easy. Crew aloft changing some old lines for new ones, making canvas tool bags or leather chafing gear for the rig.

Suddenly a previously unnoticed cloud appears and rapidly grows at our windward-side, gradually be
coming darker and darker while growing and spreading, eventually catching up with us.

First orders from Captain and Officer can be heard around asking for taking away the higher sails and stand-by to strike down the next ones, all while a pouring rain starts washing over the ship.

Some hurry to the jib boom to pull on the Flying Jib downhaul and maybe the Outer Jib too. Steering is taken in the wheelhouse trying to adapt heading to the capricious wind changes in force and direction. Some appear on deck in their rain gear, others prefer to shower for a deserved refreshment from the unforgiving heat.

But nothing lasts long, soon Europa is back on course and now the squall is taking off at her leeward side. Sun peers off the clouds and wind stabilizes. Time for setting canvas again and give it a try for progress under sail, which today we tried a couple of times.

A typical day in the doldrums upon crossing the equator, with its intervals of the scorching sun,
calm airs, and frequent squalls throughout the day and night. Between showers, enough time to continue with the plankton and microplastic trawls. The first one showed fewer bioluminescent organisms than the samples taken a couple of days ago further north, the second performed under sail only while collecting more plastics in between
heaps of Sargassum that threaten to clog the net.

Amongst the free-floating seaweed a myriad of crustaceans and small fish are caught as we ll, including this time a porcupine
fish in between them. Annoying as they can be for these specific scientific projects, Sargassum, is considered an engineer species creating their own drifting habitat, dumping waves, processing carbon dioxide and dimming the light from the surface to deeper waters.

At the same time sheltering, protecting and feeding a multitude of other organisms, from microscopical algae to large fish, acting as an umbrella species in those equatorial and tropical Atlantic waters, simultaneity acting as a key species to maintain all their populations and the biodiversity on the open oceanic waters.

Amongst waters rich on this alga, windless areas, numerous squalls, and shifting winds, Europa sailed 98nm in the last 24 hours, motor sailing with a little bit of proper sailing here and there, taking advantage of the few good puffs of wind. Nevertheless, when actually a breeze can be felt it was almost never a steady one from the same direction, though during the day the tendency was to become between SE-ly, from a NE-ly start, veering more to S-ly later on in the night.

Under this typical variability of the doldrums, in the afternoon all squares were clewed up and furled, together with the lower staysails, with a short break in between all that for stopping the ship, hove-to under Staysails and go for a freshening swim.

The opportunity was taken by a Swallow to find our ship as a resting platform on its long migratory patterns between Europa and Africa, and spend the rest of the day around, finding a perfect overnight spot above the radar in the wheelhouse, safe from the menacing squalls all around.

In the meantime, crew douse all the staysails and furl them as Europa motors straight into the wind and pitches in the long oceanic swell.