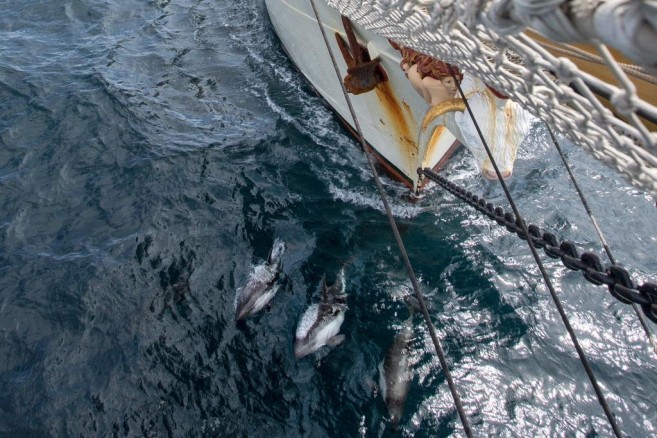 Getting closer to Le Maire Strait and the Cape Horn Archipelago

We find ourselves sailing under full sail in the morning at 6.2 knots. After sailing close to the wind, now we change our course from SSW to SE. The wind blows 12 knots from the NE.But those good conditions change in the afternoon when the wind backs to the East and dies down, leaving the Europa with all her canvas set sailing at 2 to 3 knots Southwards. Luckily later on the wind picks up and we gain some speed, good chance for a group of Peale’s dolphins approach for a while and bowride the Europa. At starboard side we can see land in the horizon, the hills of the Argentinean part of Tierra del Fuego reveal themselves out of the low clouds.

Conditions change again in the evening, and we can pick up speed and steer on a good course SSE to approach Staten Island and the Le Maire channel, 78 nm away at midday. Great sailing under blue skies and temperatures getting chilly as the night comes, good birthday at sea for our crew member Krista! With speeds of this kind we will be crossing this famous strait during the night or early morning. From there on, Cape Horn archipelago lies around 100 Nautical Miles away in a SW-ly direction. We have been sailing on relatively shallow waters during the last days, offshore the Southern Argentinean coast, as here the Continental shelf extends 200 nm and even reaching Falkland Islands into the ocean, but South of Staten Island, around the Horn and once reaching the Pacific Ocean, the Continental shelf on Chilean waters is much narrower, and after the shallows around the Horn the depth increases dramatically.

Whenever the sea conditions and the sail handling allows we keep going with the lecture program on board. Today Bouke talked about Ship’s stability, or how come… we don’t turn around. Since our departure in Salvador de Bahía we have sailed already over 3000 nm under sailpower only (exactly 3107 nm, the motoring hours have been subtracted from this figure), so we accomplished one of the requisites for a traditional Cape Horn rounding, next one is facing the Horn itself, then sailing to 50ºS up the Pacific coast. Still many miles to go on those unpredictable Patagonian waters… nothing is for granted here. Today Peale’s dolphins showed up several times, Sea lions and Fur seals as well, together with Black browed albatrosses, Giant petrels and Magellanic penguins.

Wow so exciting. I hope that you all stay safe and enjoy the experience. Sounds like an exciting few days ahead. Good luck.