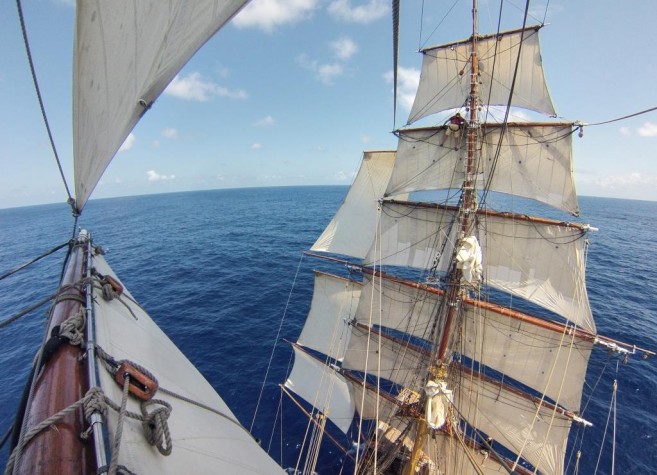 Sailing South, passing Abrolhos latitude and getting closer to Victoria shallows, between the continent and Ilha Trinidade.

Sailing South, passing Abrolhos latitude and getting closer to Victoria shallows, between the continent and Ilha Trinidade. Several changes today on the light breeze regime that we are experiencing. That made us start one of our engines for a while a couple of times during the day, to keep an average speed just over 4 kn. Soon, as we reach latitudes of Rio de Janeiro we will not be allowed to use it anymore, so better keep a relatively acceptable speed on our way South now, even if it involves a bit of push with the engine. Today our beloved “old lady” saw her three Studding sails on her Fore Mast, port side, being set as well, performing and looking good!

Since last night we are in quite shallow Continental shelf waters, passing by 19º S parallel, South of Abrolhos area. But soon, after getting over the area between the Brazilian coast and Ilha Trinidade, we will get to the deeper oceanic waters on our way South. A good thing about this zone is also that we have the Brazilian current with us, helping us with around 0.8 kn. During the last 24 hours we have sailed 131 nm, at an average speed of 5.5 kn (a bit slower than the past days as we having lighter breeze), but already 351 nm done since we started in Salvador, meaning a total average speed of 5.9 kn. At this moment we are still a couple of days behind William Schouten and Le Maire trip, but we have to have in mind that they started their adventure departing from Holland in June, while we started in September. Regarding their diaries we can also see that they experienced same kind of weather and wind conditions we are having in this area.

Today we crossed the wake of the German cargoship “Eship 1”, a special sight probably as much for us as for them. The Eship 1 is equipped with 4 Flettner rotors, an invention of the late Anton Flettner (1885 – 1961). This German shipbuilding engineer experimented already with this invention in 1924. The 4 driven and fast turning rotors are generating a force that works in a 90 degree angle of the wind direction blowing against the rotors. This is called the Magnus-effect. During his life the system never became a success story but nowadays it is a way to reduce the fuel consumption. When we met the Eship 1 today, the rotors were not turning because of headwinds. But with a fair wind the fuel reduction could be between 15 and 20 %. Being a cargo ship that is used for transporting windmill parts, makes us think that the profit in fuel cost, was not the only motive in building a ship with this special “sailing” system. The Eship 1 was on her way from Santos to Emden and also rounded Cape Horn on a trip to Chile earlier. We wish them and us fair winds.

As we all got already into Europa working system, it was time to start with talk/lecture program on board. Today Jordi and our fellow voyage crew Chris did a general presentation of the trip, putting it on an historical context and explaining how the project came to life and we can actually find ourselves sailing those waters aiming for a traditional proper crossing of the Horn. On that way we all can have a better idea of how we try to manage the trip and different plans depending on sailing and weather conditions.