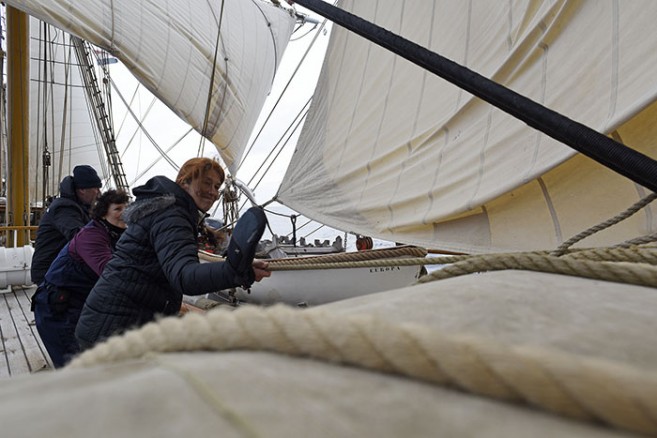 We are here – but where are we?
(...)
During the day we have sailed away quite a bit from our straight track,
we went about 50 miles more to the East. As the wind changes back to the
West we can find our old course back. Though we have sailed a 146 miles,
we are only 126 miles closer. Which is still good, if we can keep up
this speed we might see land around our next 8 o´clocky tomorrow. During
the last few hours of the afternoon the water temperature has dropped
from 5 to 2,9 degrees Celsius: we are officially in Antarctic waters!
We are here, but where are we? It is less than 200 years ago that the
continent was first sighted by Fabian von Bellingshausen, in 1820. Myths
about the continent have existed much longer; Antarctica is the only
continent that was thought to exist long before it was discovered. The
Greek reasoned that, in order to balance the known lands in the North,
there must be a huge landmass in the South. Otherwise the globe would
simply tumble over. As the Northern Hemisphere was lying under the
constellation of Arktos, the Bear, they named the unknown land in the
South Antarktos – the total opposite. And that is true for many of us –
we are on the way to the total opposite of our daily life.
During the late evening the wind increases up to 25 knots. As she keeps
increasing we take down the upper stay sails and the royals, continuing
through the night with a speed of between 8 and 10 knots.
Sarah