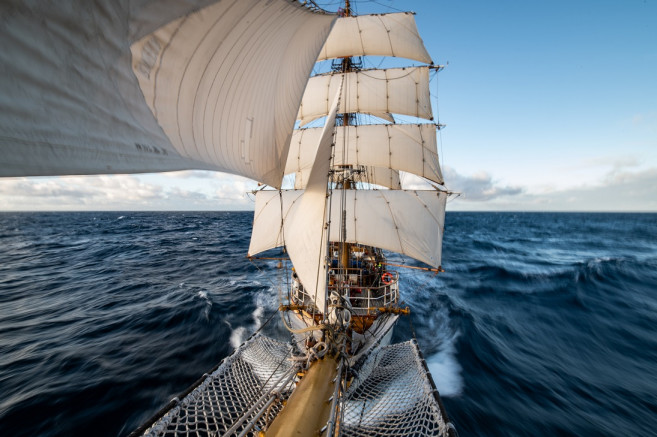 With an almost full moon shining amongst the clouds and Scorpio showing now and then high over our heads, braced square and sailing practically downwind under all the squares plus the jibs, Europa keeps a good course northwards, rolling on the swells of the southern ocean.
The wind didn’t steady up and when gusts climb over 30 to 35kn is time to clew up Royals and furl them at dawn.

Soon afterward, the Sun rises over partially cloudy skies, announcing good weather. Not for the full day though. After lunch, meteorological conditions change starting to be overcast and rainy, indicating also a forthcoming wind change, not to happen yet for a few more hours.
Southern Ocean, South Atlantic, uninterrupted Eastwards flow of water around the globe, here Low-Pressure systems pass-by sweeping the area with their clouds and weather changes. But sure the surface water temperature rises with about 3ºC in a few hours, helping with the atmospheric moisture, drizzle, and rain, indicating the crossing northwards of the Polar Front. Today, we leave behind the Antarctic System to enter Subantarctic more temperate waters. We have been south of it since the Europa found herself halfway through the Drake Passage on her way towards the South Shetland Islands, over three weeks ago.

Between the blue skies early, the overcast and damp weather later on, and a forecast telling of filling up strong winds, we all had a full day of new and exciting experiences at sea. Sail training talks are followed by hands-on hectic work on deck, setting, or dousing canvas.

During the morning, when the wind becomes steadier, Royals come up again, while Europa still sails almost downwind rolling in the big swells.
Veering winds to W-ly 15-20kn, at noon, make for bracing Beam Reach in Port tack to keep an NNE course at a good speed between 7 and 8kn.

Time too for setting more canvas. Fore Top Mast Staysail, Middle Staysails, and Spanker are added to the sail configuration. It took a couple more hours for the wind to shift to NW-ly and for us to jump on deck and brace Close-Hauled. Soon, a couple of gusts and sudden wind shifts seem to announce the arrival of the forecasted 35 to 40kn. Under those increasing winds, deteriorating weather, and growing swell, in the evening Royals, Outer Jib, and Mizen Top Staysail are stowed away and the Staysails are double sheeted, all in preparation for the tough weather to come.