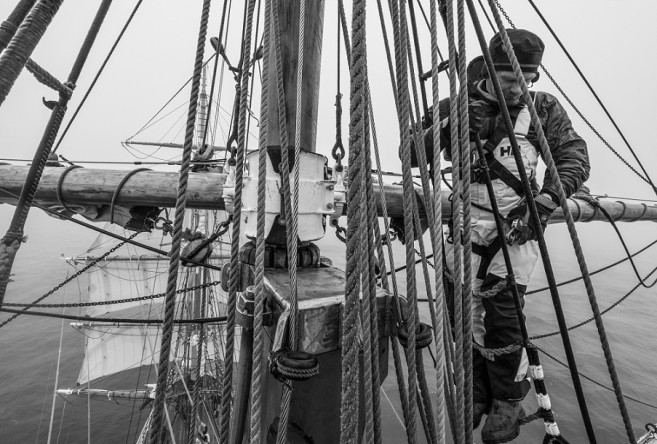 A cold, cloudy and rainy morning welcome us to the last day at sea before reaching the South Georgia coasts.
Water and air temperatures have dropped, making for cold watches at the wheel, on lookout or giving a hand with the sailhandling. Dripping foul weather gear and heaps of warm clothes hang now on hooks and handrails below decks when we are not on watch.

Low clouds came with rapidly increasing Northerly winds and rising seas. From the early morning onwards, hands are called on deck to gradually douse canvas and some keen ones ventured aloft to help the permanent crew furling them. By the afternoon, the Europa has reduced sail to just Upper Topsails, Inner jib, Aap and a storm tri-sail set on the Mizzen. Both with the idea of reducing our speed and to be ready for even stronger gusts that have been blowing at 30 to 35kn. Eventhough South Georgia is at hand, the wind force and direction doesn’t represent a good option to approach the exposed and rocky northern coasts of the island. With no good shelter to be found on that situation, it is a better deal to brave those rough conditions a bit offshore and wait for the wind shift predicted for later at night in the forecast. All an all, not a great surprise and more of a “welcome to the reality of South Georgia”, where this weather, winds and seas are not at all unusual.

Reaching South Georgia is worth it. It is like travelling to the fabled land of Prester John, the mythical kingdom in the Southern Ocean, a place rather like the Scotish Highlands but with glaciers. If you are fortunate enough to arrive with a break in the clouds, you are greeted with a vista of mountains and ice, shrieking flocks of sea birds, pods of dolphins and, in among the floating mats of seaweed, harems of seals.

… a break in the clouds not found today, even though the presence of land is to be felt behind the veil of thick rainy clouds, we will have to wait until tomorrow to have our first glimpse of land in 10 days. Radars, Charts, Satellite positioning, increase on the height of the swells as the sea bottom rise, they all tell about the land closeby. Remote lands first sighted on 1675 and trampled by humans about a hundred years later, when the famous Captain Cook took possession of the island for Great Britain. His tireless search was for the elusive southern continent, Antarctica. By that time some were sure of its existence, for others far south there was just an empty cold sea at the end of the world, for others a mythical land. Probably Cook belonged to this latter group. During his second expedition with that purpose, he came across South Georgia. The land he saw when not covered by clouds and stormy weather, was described by him as “exceeding the wretchedness both of Tierra del Fuego and Staten Island, which places till I saw this I thought might vie with any of the works of providence”.

A ditch-digger’s son becomes one of the greatest navigators of his own age, or any other age, and is sent out three times to look for the one land he does not believe exists.

Hoping for an improvement and the chance for starting our visits to the island, we spent the time today between sailing, sailhandling and busy with the last preparations before arrival. Briefings and lectures are done, biosecurity procedures ready. Out on deck things are in good progress too for preparing all for landings. Both our zodiacs with their outboard engines lay put together on the Sloop deck, their painter lines have been rigged, ladders and rest of implements for a safe disembarkation are readied too.

Waiting for our chance to sail closer to land and maybe drop anchor later on, the late evening arrived while the main braces were pulled to the opposite tack than the Fore mast. Lights on deck are turned off, portholes closed, all to reduce the amount of light shinning from the ship that can attract the many birds that inhabit the island. The next hours are to be spent laying heave-to on a heavily rolling black ship.