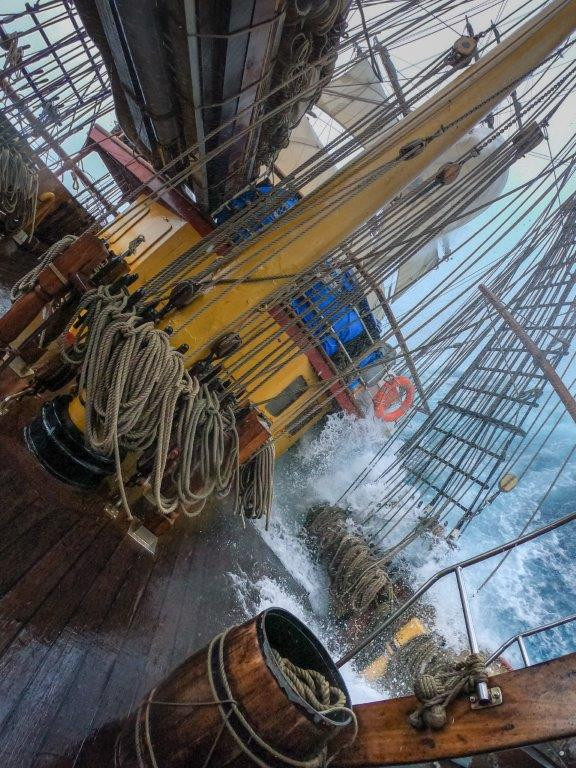 Out here, we get only written glimpses of what is happening around the
world. It is difficult to grasp the full extent of what is taking place.
The fact that we are fully focused on racing Europa to the equator and
beyond (why make the trip last longer than necessary), combined with our
12 hr working days (maintenance!), means that we all probably don’t take
the time to ponder what’s happening in the world. Or at least, not enough…

Right now we focus on getting Europa around the low we have been chasing
successfully and which has now more or less stopped in our path. It is
absolutely the best low pressure system I have ever encountered. While
we were more or less becalmed, smack dab in the middle of the Roaring
Forties, it came from the South American continent and passed west of us
on a north-easterly track, just close enough that we could get into the
easterly winds around the bottom of it. As the low kept moving to the
northeast of us we gradually came into the south easterlies on its
southwest quadrant and have been using those for the last three days to
make our way out of the Roaring Forties and into the thirties, the
so-called Horse Latitudes. For the full lecture on this area of the
globe (yes! It’s definitely not flat!) between the Hadley cell and
Ferrell cell atmospheric circulations, you will have to book a trip with
us when the Corona thing is over. I will also not go into explaining the
term Horse Latitudes. Several explanations about the etymology of this
name are around, but none seem to be conclusive. The area is the divider
between the westerlies to the South and the southeasterly Trade winds to
the north. It is known for its light and variable winds. If we manage to
get around this low -- which is slowly losing its significance -- and
can take advantage of the remaining breeze to the north of it, we can
hopefully propel ourselves a good distance into these Horse Latitudes.

That will get us closer to home, but we will still have a long way to
go. Will the world have turned back to normal, by the time we arrive? I
suspect not, but if it has, we will have missed out on one of the most
epic low’s of modern history. That could be conceived as a good thing,
but I am sure, most of us on board would, if they would have had the
choice, rather have spent these 70 days of sailing with their loved ones
ashore. Sure, it may be an “epic voyage”, as some will have us believe,
but for us it’s more or less business as usual. It’s just a bit longer
than normal and with less people than normal.

That said, the sailing in this low (the best low ever!) has definitely
been epic: winds gusting to 62 knots, waves up to about 7 meters, with
the occasional rogue due to a cross swell and current running against
the wind. Getting soaked on deck five times over while sail-handling or
coiling lines that have been washed of the pins and overboard. Hand
steering all the way….Sailing is fun!

I hope that even with all the Corona issues and suffering, people ashore
will also find moments to experience some pleasure in these epic times…
Happy Easter.
Eric

Thank you Captain for the impressive pictures, for that concise, cool and brilliant description of such a dramatic gale. In there, it would have made most of us - hat have already danced on the Old Lady's deck-, just pale. Bravo for that intrepid crew! Now you have soft southern wind pushing you up for some days within a high pressure system, that should give you a well deserved rest time. Jesus, you must be exhausted so far... Enjoy those beautiful southern Lights... Are they alike as around the Açores?