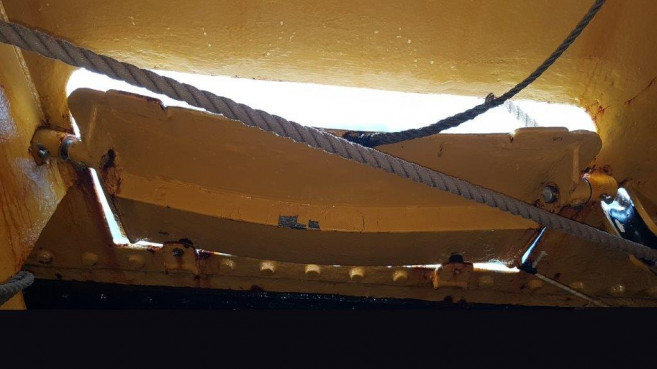 With our trips into the Southern Ocean and to Antarctica, we are quite
used to heavy weather sailing. The Drake Passage is known for its rough
seas, but after some 60 odd crossings in all kinds of conditions, I
don’t remember ever experiencing damage to the ship by the actions of
the ocean.

As I write this, we are still sailing our epic low, which has propelled
us for most of a 1000 nautical miles and already for more than 12
degrees in latitude. In the first days of our encounter with this low
pressure system, when the winds were highest, we actually received some
damage to the ship. We were hit side on by a wave which must have been
slightly bigger or steeper than the rest. It sounded like we were being
hit by a truck. The result was a bent freeing port, one of the opening
gates that let out the water deposited on the main deck by boarding
waves or by sailing the cap rail under water. These freeing ports are designed
to open and close to let out excess water on deck.

As you can see in the picture, the force of water at speed can be
impressive. The freeing port, made out of 6mm steel plate with an 8mm
reinforcing rib welded on the inside, was bent inboard by a good amount.
The hinge points had no choice but to follow and they deformed the
bulwarks quite a bit in a very localised area. The amount of bending in
the bulwarks is probably a bit too much to fix with the means on board,
but we’ll give it a go anyway, when we’re back on starboard tack in the
Trade winds.

Luckily, no crew members were harmed in the bending of this freeing port.

Have a save journey further up north and respect for what you are doing in that heavy conditions , says an old sailor how sits every day behind his desk working at home. A Sailing greet from the south of holland

Eric, You must remember the knock down off the coast of Brazil back in 2010, where the freeing port was under water!!! Nothing broken, but the two of us couldn't budge the wheel... you had to use the hydraulics to bring us about... we ran 6 miles with with wind before the storm subsided. That was an exciting time!!! Sounds like the South Atlantic still has a few surprises left.