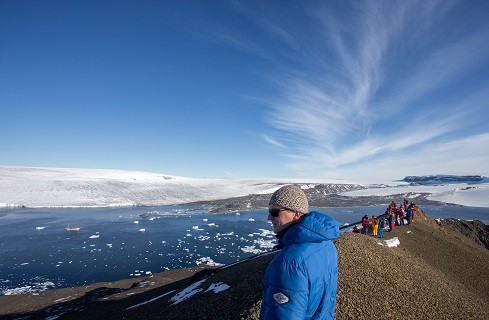 After the great landing last afternoon, we spent the night at anchor at the same spot, with the idea of heaving anchor early in the morning and start our way around Vega Island and head towards the SE, to the small island called Devil, located on a large bay North of Vega Island.

After the great landing last afternoon, we spent the night at anchor at  the same spot, with the idea of heaving anchor early in the morning and start our way around Vega Island and head towards the SE, to the small island called Devil, located on a large bay North of Vega Island.

We heaved anchor at 06:00h in the morning and started our way through the relatively ice free waters of Fridtjof Sound, on a gorgeous sunrise while manoeuvring amongst huge tabular icebergs. Once in the Erebus and Terror Gulf, south of the narrow sound we surprisingly encounter ice clear waters all the way till arriving to Devil Island. We had to motor our way under 20 to 30 knots of headwinds in freezing cold temperature of minus 6ºC. As we arrived to the proximity of the spectacular landing site we could see that all along the coast, including the anchor spot we used on other occasions was packed with icebergs and brash ice, making it impossible to anchor and land. We proceed instead to the Southern side of Devil Island, finding a relatively good spot between Devil and Vega Island, in the middle of the channel separating them.

Before going ashore a scout zodiac had to be sent to look for an appropriate landing spot as the coastline looked pretty blocked by ice, but our guides found an spectacular spot where to reach the narrow beach and start the exploration of the island. Devil is a narrow island, around a mile long and with a summit on each end, Lying in the centre of a small bay 1 mi SW of Cape Well-met. Devil was discovered and named by the Swedish Antarctic Expedition (1901-04), under Nordenskjöld.
Once we were all ashore we cross the valley between the two summits and head towards the large Adeli penguin colony located in the Northern shores of the island. As suspected, the rookery was almost deserted, and just a few late individuals were seem moulting here and there. Quite a lot of dead chicks were also found around, but thus sight is quite normal at this stage of the breeding season, when the parents are gone, the chicks that were born too late couldn’t get enough food to finish their growing or just one of the two chicks that they had per couple could make it, while the other being a bit weaker could not get enough nourishment. Clear example of “the survival of the fittest”.

The weather was spectacular, with sun shinning and a few high clouds. Perfect for climbing to the top of the Western tip of the island, where many of us reach, including the Captain that joined us for this landing. A smaller group climbed also the bit higher and more difficult Eastern summit. Both with dramatic views over this part of the Weddell sea. Even a group of Orcas was spotted at the distance, and several Crabeater seals were lying around on the icebergs surrounding Devil Island.
The last ones of us arrived on board again just before dinner time. Afterwards, and before starting our anchor watches, the Europa had to be re-anchored. The tide changed and lots of small icebergs were afloat at the channel where we were, some of them bothering us on our anchorage.
But soon we found another spot close by and spent a relatively quiet night, even tough we swung a lot around the anchor and a couple of times a threatening piece of ice approached us. We have the plan to heave anchor early in the morning and resume our way South to try to reach Snowhill island tomorrow.

Sounds an amazing adventure. Trip of a lifetime for Malcolm. Bit blowy though!