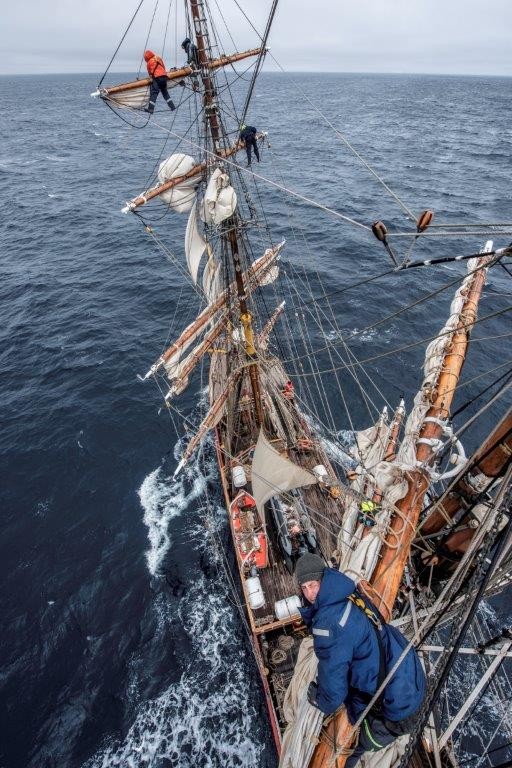 At dawn good winds from the NW, blowing between 15 to 20kn helped our progress allowing for setting all our canvas under the overcast and snowy skies. With that Europa makes her way following a 230º course on the northern Weddell Sea, having a great sailing first hours of the day. The ups and downs in the wind seem to announce a big change that actually happened just after midday, when first it increases over 30kn just to suddenly back about 40º, asking for a hectic pre-lunch hour of sailhandling. Under those conditions first the higher staysail, the Vlieger comes down and is furled but almost at the same time is decided to clew up all the squares and furl them. Engines roar again pushing us deeper into the Weddell Sea in the direction of eastern Antarctic Peninsula. After lunch the weather was already much better, with the sun shining amongst the high clouds, allowing for great views of several Fin whales close to the ship. The sights of these huge whales just kept increasing during the day until we end up finding a feeding pod of them after diner. The group counts up to 30 individuals spread over a large area. Some of their high blows and large backs crowned by their typical dorsal
fin can be seen next to the ship, while a look at the open waters towards the horizon reveals many more of them. Fin whales are the second largest whales in the world, right after the immense Blue whales. Their preferred areas to aggregate during the polar summers are the deep waters close to the continental shelfs, where the sea floor rises steeply as getting closer to the shallower depths near the coasts. Being at about 50nm from our goal, Danger Islands, and with that, to the shores of Antarctic Peninsula, looks like we found ourselves in one of
those areas. Between them a handful of Humpback whales share the region, though they are encountered in greater numbers closer to the continent in shallower waters. By that time, we had already changed the tack of the Staysails to Starboard, during the afternoon, as the variable winds had come all the way to SW-ly with a tendency of decreasing. And at the end, after diner, while enjoying the great sights of the heaps of whales around, all
remaining sails set are taken down and furled. All under a setting sun that promised for a great dawn light, as we got a bit later, when tabular icebergs could be seen in the horizon, bergy bits are scattered around, even one of them being used as a temporary rest stop for a couple of Adélie penguins. Now under engine we eat away the few miles that separate us from the firsts islands, east of Antarctic Peninsula, called by the appealing name of “Danger Islands”. This small archipelago has for a long time been sought by our guides, who never had been there despite the several times they had tried. Other seasons they have been stopped by large amount of sea ice, that this year seems to be greatly reduced. But for sure its concentration will increase during the night as we get closer to them, where we plan to arrive in the morning and try our luck for a landfall. The archipelago is known by its rough beauty seldom visited and for being home of the largest rookeries of Adelie Penguins in the East Antarctic Peninsula.