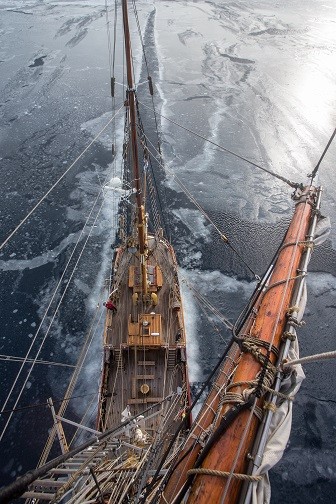 Today we woke up with the idea of keep sailing deeper into the Weddell Sea, to try to reach Snow Hill Island.

That was the place where Nordenksjöld himself, together with five more men, built the prefabricated hut where they conducted their scientific research and surveying of the area, and afterwards were stranded for another winterperiod after the wreck of their ship “Antarctic”. So far the ice conditions had been very favourable to our sailing in the Weddell Sea, but soon after heaving anchor and start our way around Vega Island, we start realising the true face of this treacherous sea. Gradually more and more sea ice bands start appearing, together with an increasing numbers of icebergs. At times we find ourselves surrounded by brash ice, and lookouts are sent up the rigging for a better view, to trying to find leads between the lumps of pack and brash ice, zigzagging our way avoiding the big tabular icebergs as well.

We slowly get into Admiralty Sound, that separates Seymour and Snow Hill Islands from James Ross Island. The broad NE part of the sound was named Admiralty Inlet by the British expedition under Ross, who discovered it on Jan. 6, 1843. This same expedition also discovered Cockburn, Seymour and Snow Hill Islands Admiralty Sound was determined to be a sound rather than a bay in 1902 by the Swedish Antarctic Expedition under Nordenskjöld. But there, as we get closer to the conspicuous Cockburn island, that rises 450m above the sea level, the ice conditions worsen, and the Europa tries to make her way through newly formed sea ice. The seawater temperature has been between 1.8 to 2.0ºC below zero. That means that the surface is getting frozen pretty quick. The process that we are witnessing as we slowly motor through this ice, under 25 gusting 30 knots of headwinds, is known as the starting of one of the most important oceanographic currents in the world, the Great Conveyor Belt.

As the surface sea water freezes over, the salts contained on it are expelled to the surrounding water of the newly growing ice. The water around gains salinity, and this, together with the low temperature, increases its density, making it sink all the way to the ocean bottom, creating what is known as the Antarctic Bottom Water. Due to the rotation of the Earth, this deep water starts travelling eastwards, passing on its way all the Oceans of the world. As it flows through the Pacific, it mixes with other water masses, gains temperature and slowly looses density, rising from the sea bottom to intermediate layers and afterwards, continuing its movement reaches the North Atlantic but now already being surface water. There, in high latitudes between Greenland and Norway, the atmosphere is relatively colder that the water temperature, and this water mass releases heat to the air, warming all this area. In winter, at Arctic latitudes, the same freezing process occur, creating again dense water as the sea ice grows, sinking and closing the cycle again.

After sailing for a while over the freezing water and the new ice growing, on our attempt to reach Snow Hill Island, we find out that all the seawater intakes of the ship are getting frozen and clogged with ice. That blocks all applications of saltwater use on board. Watermaker stops running and the shaft cooling of the engines start to heat up. We have to stop the engines and clean the blockage, trying again afterwards, but the process happens several more times. The expanse of sea under this conditions stretches all the way from the North of Cockburn Island to our goal, Snow Hill Island, still around 10 nm to go, also as we can see from the up the mast, the pack ice gets thicker closer to the coastlines. All this implies that its time to turn around and head towards the destination for tomorrow morning, Paulet Island. To help on our way North we set our Top sails motorsailing the rest of the day. Surprisingly several Snow Petrels fly around the ship, and we all enjoy the evolutions of those beautiful Antarctic birds as they follow us and feed on the krill that is brought to surface by our propellers removing the water column as we advance. Several Antarctic Minke whales were also spotted and also a few Sei whales, that during summer occasionally reach the edge of the ice in Antarctica.

It all ended up spending almost the full day dealing with the heavy ice conditions of the Weddell Sea. What a great feeling to be completely surrounded by all sorts of ice in the mythical Weddell Sea, where many early explorers suffer similar situations and where several stories of struggle for survival had happened, including the renamed Swedish Antarctic Expedition and the legendary odyssey of Shackleton and their men. We spend the dark hours drifting and slowly making our way North through thick ice conditions.