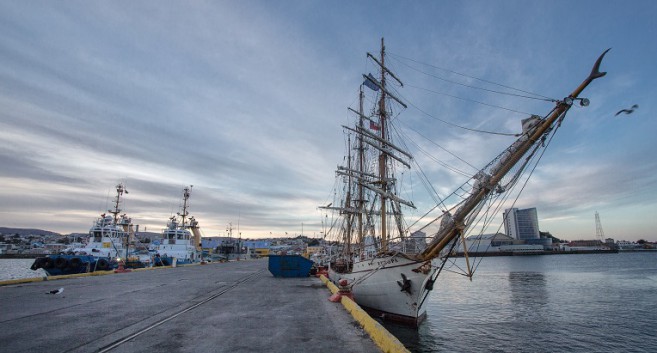 For many of us, the sight of the Europa lying alongside the main pier at Punta Arenas was a relieve after have been flying long distances to get here, the city capital of the Chilean Magellanic Region, at the shores of the Magellan Straits. The city is located in a flat area in comparison with what we were about to see during the next three days sailing the Southernmost fjords and channels of the world, amongst the rugged spine of the Andes Mountains. These mountains stretch the entire length of the South American continent, coming right down to meet the sea here at the southern tip of e Chile and Argentina.

The Bark Europa was moored in “Muelle Prat”, located close to the city centre. The busy port was home of several fishing, scientific, navy and coast guard ships, with the Europa looking pretty and elegant amongst them. It’s from here that we will start our journey already tonight. First along roughly 400 nm from Straits of Magellan to Cape Horn, then over some 500 nautical miles of the Drake Passage to the treacherous iced waters of Antarctica. From there we plan to sail to South Georgia, the remote Tristan da Cunha and ending up in Cape Town. A journey which will take us to some of the most pristine and remotest places on Earth. Some already left the luggage during the day and venture out to enjoy a few hours in town, but many embarked with all their belongings for the trip around 16:30 to 17:00h.

That was the time when we all begin to gather on the Ship’s Main Deck and introduce ourselves while enjoying a cup of coffee, tea, and cake. In the meantime the check-in procedures were done in the ship’s library. During the afternoon, Jordi, the Exp. Leader for the trip took pictures of all of us, to put together the “ship’s facebook” to get to know each other’s faces and names more easily. When all of us were on board and with all the embarkation formalities done, the three bells were rang, signalling a gather together, this first time to proceed with an official welcome on board talk by the Captain Harko and a toast in honour to Neptune, asking him for fair winds. Followed by dinner time.

As we sail already tonight, before departure there was still another activity to do, the Mandatory Safety and Abandon Ship drill. Afterwards the Pilots needed by law while sailing inner waters of the Patagonian channels embarked, and we were ready to let go our moorings and start our adventure in the Southern Seas.