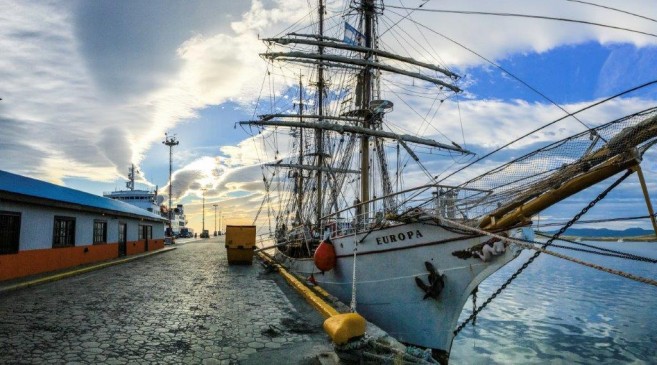 Many hours or even full days of travel brought us to converge in the
Bark Europa, from the four different corners of the world. The crew and
the ship, quietly moored alongside Ushuaia harbour, was ready to welcome
us on board in the afternoon, even though many already drop their
luggage during the morning.
Coffee, tea and some sweet treats were ready for us to enjoy as we
boarded and got to start knowing each other. The passion for photography
and the willing to explore Antarctica, the last wilderness expanse on
earth, acted as a sort of invisible thread tying us together, framed in
the incomparable setup of the Bark Europa.
While a cacophony of languages resonate on deck, as 14 nationalities
will compose the total crew for the upcoming trip, we were called to the
ship’s library for the official check-in.
Many ideas, plans and hopes were shared already during this first
exciting encounter with the fellow travel mates for the trip and its
conductors: the captain and his crew, guides and specially selected
photography and videography team.
Soon our captain Eric called everybody on deck, introducing crew,
general idea of the trip and some basic safety topics, followed by our
first dinner on board.
Daily schedule was not over yet, some more information and preparations
for the journey had still to be done before we could have the night off
in Ushuaia as Europa spends the night alongside, planning to undo our
moorings in the early morning.
Our guides, led by Jordi, gathered all of us to start familiarising
everybody with the ship and our duties board, while the crew led by our
bosun Dan gave some rope handling explanations on deck as well, hitherto
making us realise the effort that takes to put together a sailing trip
of those characteristics, in a 1911 built Tall Ship.
On a journey of the kind we are about to endure, all orbits  around
building a sail training program, gaining history, wildlife and polar
systems knowledge, sail and enjoy. All while developing and training our
passion for wilderness and the ways to photograph and film it, in a
combined effort of everybody on board to make an unforgettable trip to
Antarctica.