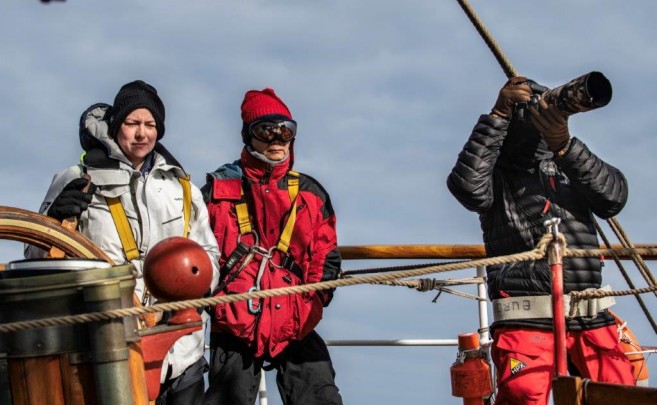 Leaving behind the colder Antarctic waters and the frontal area of the Antarctic Convergence, following the convention of naming this region “South Atlantic” since now onwards Europa will sail its waters until reaching Cape Town. The two last days weather have been quite alike. Rain and occasional squalls but then clearing up during the evening, ending up in a  beautiful sunset. But today the distinctive episode had been the remarkable and abrupt wind shift during the afternoon. Before dawn the NW-ly wind started showing a tendency of veering to N-ly, blowing at about 18kn. To take advantage of this, we brace from sharp Full-and-By Port Tack to to Close-hauled, steering 45º and keep falling off gradually, at a speed of 6 to 7kn. Sudden increase on wind force made for taking away Outer Jib before breakfast. But in the afternoon started a quite dramatic change, involving raising blows up to 30kn, then dying to about 10kn, just to rise again for a short period up again to 30kn, easing quick once more to 10kn and coming around to NW-ly. Since then on, the situation seem to settle down, yet with this light breeze shifting between W-ly to NW-ly. Under those conditions we can add more canvas. First Desmond is set again and before dinner, with steady winds at about 10kn blowing from the W, many hands on deck help hoisting Outer Jib, Top Gallants and Middle Staysails, and bracing less sharp to keep Beam Reach sailing course. Like this we start steering more Northwards, although in the light airs together with the rolling in the noticeable swell, we can just get quite
a slow speed, between 1.5 to 2 kn. Under the stillness of the wind we wait, on a rolling ship, with most of her canvas set. Forecasted for soon are blows rising just enough to move the Europa again at a reasonable pace towards our destination. In the meantime, rain seems to stop, and clear skies appear to the West, giving just enough room for the sun to shine while setting. A clear night and
starry skies followed the beautiful sunset. After the wind had been changing during the day, the night went on under steadier 10kn of backing SW-ly breeze. The lack of windier conditions plus the noticeable swell kept slowing us down. Later on during the pitch black night and under a beautiful clear firmament, we set more canvas, and the early hours of the new day find us sailing under all
Squares, Lower and Middle Staysails, all head rig plus the Spanker. Despite of the slow speed during most of the day, the distance covered during the last 24h, counting from our regular daily meeting after dinner, has been of 141nm. 858nm still to go until reaching the steep and high volcanic island of Tristan da Cunha. And already at that distance from it, some of its feathered inhabitants
fly around the ship today. Some of the huge Wandering albatrosses, maybe from the difficult to identify Tristan subspecies, visit us, together with some of the smaller Black browed. And also one of the highlights of the area, the endemic Spectacled petrel could be seen today. The kinder weather makes for all to feel better, some joining on deck for bird watching or taking photos, all also attend the watches, meals and lectures. By now, with everybody getting used to the life at sea for prolonged periods of time, we can look back at the past, when those two-faced waters were sailed for the first times on long voyages of discovery. Wearing modern technology clothes and using navigation instruments to help us steer properly our way (besides many more commodities on board), we try to get a glimpse onto the classical mariner’s life. But it is difficult to imagine how people like William Bruce sailed this very same waters where we find ourselves now, but already in 1902-04 on board the Scotia during his Scottish Expedition. In this area of different water masses mixing together, while sailing in-and-out the Antarctic realm, north and south of the Antarctic Convergence, they also experienced the hasty weather changes and the huge seas, as it was written in the crew’s diaries. The Scotia rolled heavily making life and sleep difficult for most. Quoting Harvey Pirie, the geologist, bacteriologist and Medical Officer of the Expedition: “although the roaring 40’s had reputation for bad weather, comparing to forties with the furious fifties is like comparing a lamb to a hyena”. Well, we just left those legendary 50’s latitudes behind, entering the “roaring wind” kingdom.  Already the temperature change can be easily felt despite the rainy day. Still many miles to cover on our trip, many winds to experience and sea states to endure. Bruce, besides exploring this part of the South Atlantic, visiting the Tristan archipelago related island of Gough on their way, Bruce voyage set the parameters of the ship based scientific expeditions. They spent two years including an overwintering and the settling of the first Antarctic Base at South Orkneys, still in use nowadays, doing extensive and successful Antarctic research on fields like biology, geology and meteorology. Also conducting water sampling, trawling, checking depths, mapping, charting and discovering new geographical exciting news about
the shape and Antarctic characteristics. The Scotia scientific results were published in six volumes between 1907-20, but the log of the expedition had to wait until 1992 to see the public light. Between their many discoveries and future scientific repercussions, their geological studies and Antarctic fossil collection helped Alfred Wegener to develop the theory of plate tectonics in 1906-07 while he was researching in Northeast Greenland. However Bruce Antarctic discoveries were made on voyages that were valuing science over adventure, thus receiving little recognition outside scientific circles.