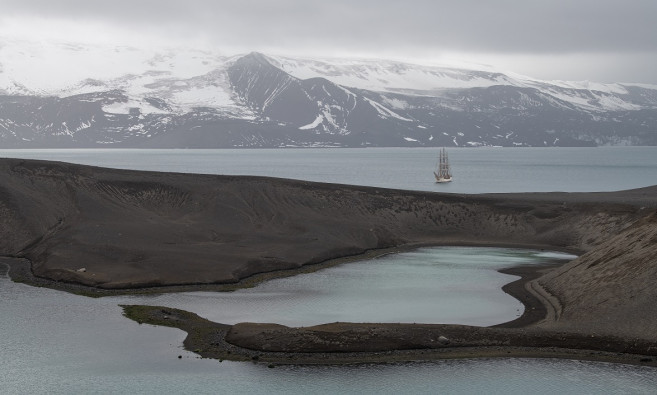 Of rough beauty and usually under boisterous weather, South Shetlands were the first land we all saw yesterday after the few last days crossing the Drake Passage. Not just for us, but this large archipelago represented the first sight ever of Antarctica. Controversial reports date it back all the way to 1598, when the Dutch merchant Dirck Gherritz, on board the Blidje Bootschap, was blown southwards of South America by a furious storm, reporting some lands at his return. Other un-orthodox account date from 1603, when Gabriel de Castilla in 1603, while sailing from Peru to the Straits of Magellan, was also blown south. But proper word and accepted documents had to wait until 1819, when the merchant William Smith, as many others before, was blown south off Cape Horn, ending up at about 62ºS where William sighted land. A year later a British Navy Expedition was put together to investigate these new lands. Since they lay at an equivalent latitude of the Scottish Shetlands, they were named “South Shetland”. Captain Edward Bransfield with William Smith on board plus a crew of 43, sailed south from the Chilean city of Valparaiso, sighting Livingston Island on the 16thJan 1820. Many other islands and passages were found during this trip, and their findings led to a large-scale commercial sealing and whaling in Antarctic waters. Many of their vessels ventured in the new and uncharted icy seas, discovering many sub-Antarctic and Antarctic places. Just like the destination planned for this morning. In the early hours, and after yesterday’s battering against raging winds and seas, Europa, under the capable hands of her Captain and Mate, find herself at anchor at the crescent shaped island of Half Moon. A beautiful small island already known by the sealers in 1821. Its name, which suggests its shape, appears on a chart based upon a 1935 survey by the Discovery II expedition.

The promising calm weather conditions made for starting all preparations for our first steps ashore. But the calm winds and seas didn’t last long. Quite suddenly wind picks up and the ship drags anchor under blows and gusts up to 40kn. The new situation needed for a re-assessment. Soon is decided to give it a try and go ahead with the landing attempt. Anchor is heaved and the ship is kept adrift and under engine, able to offer some lee from the waves and wind in a dynamic position. Meanwhile an exciting shuttle on the rubber boats brought everybody safely ashore for a couple of hours outing. We land on the surge of a gravel beach, laying at the eastern end of the 1.25 miles long island, amongst numerous Fur seals, Gentoo and Chinstrap penguins. Next to us, the remains of an old wooden whaling boat, dating from the early nineteen hundreds. Nowadays Half Moon is home for a large Chinstrap penguin rookery,a smaller gentoo penguin group, plus nesting sites for Wilson Storm petrels, Kelp gulls, Antarctic terns and Antarctic shags. Built in 1953, the Argentine Base “Camara Station” lies at the western shores of the island, visible from our landingsite.Another rough zodiac ride back to the ship, and after lunch Europa heads into the Mc Farlane Strait northwards, for a short visit with the ship to the spectacular rock formation of Edinburgh Hill. The patterned cliffs standing nearly 150 meters straight out of the sea, form the N side of the entrance to Moon Bay in the E part of Livingston Island. First photographed and named by Scottish geologist David Ferguson in 1913-14, they show a classic columnar basalt formation, beautifully deformed into a smooth bellied curve. They display a striking soft grey colour against the bright glaciers which surround it. Where the columns are shattered, at the base and summit, Xanthorialichens are a rich rust red and golden yellow colour. A superb natural stone carving amidst the wild weather we are still experiencing, the low clouds and light rain and snowfall gave the area a touch of mystery.With time enough to have a good look at it, Europa turns around and heads towards the Bransfield Strait, where again, strong headwinds await for us. With the heavy weather on our nose, it will take a while to reach our next destination, the famous Deception Island, over 40nm further to the SSW. Pitching against the swell and gusts of about 40kn of wind, it will take the whole night to reach it.