Gybing and Wearing ship. We started the day gybing the mizzen and soon we will sail close hold again with this rapidly backing wind. 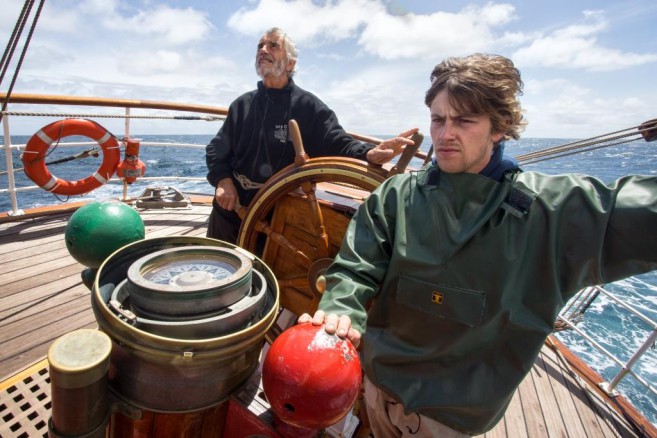 Just after this gybing manoeuvre, the captain decides he wants the Aap (mizzenstaysail) sheet a little bit tighter. Wim, one of our fellow voyage crewmembers assists him by tailing the sheet. But a wave makes him loose his balance and he slides away and he side drops on deck. Its obvious that something in his right leg is fractured and after moving him to Mate’s cabin our Doctor’s examines him, the conclusion is that he got a fracture on his upper leg bone. Proper steps are being taken, contacting Radio Medical Advice Holland (service working 24/7 for emergencies on ships). The advice is to try to evacuate the patient from the ship and at the moment we are working on different alternatives, involving Argentinean logistics. As soon as we have more information we will come up with a revised plan and further actions to take. At this moment we are more than 350 Miles away from land.

During the day we expect the wind to keep backing as it has been doing during the last 24 hours, from North, passing by NW, W, SW and becoming S-ly, (180º since last evening). At this point we plan to wear ship and head West or SSW instead of our actual SSE course. On that way we get closer to land, as we are trying since a couple of days. That goes accordingly to our original routing, and also it is very convenient for planning the evacuation, getting closer to an Argentinean Port. At 18:00 hour we are wearing ship. We are getting more and more used to the manoeuvre and we conduct it on a similar way than the other days, bearing away from the wind direction to downwind and coming up on the other tack and we are close hauled on Port tack with a new course. 265º. A very smooth operation with a turning circle of less than 2 cables (370 meters). This Westerly course will bring us closer to Argentina.

With the good weather and wind, birdlife around us becomes more abundant again, not just in the number of individuals but also in the diversity of seabird species. So far during the trip today has been the most successful bird watching day, we even spotted the majestic Wandering albatross, the largest of all flying birds, with wingspan that can reach 3.5m. Their breeding areas are located in remote islands at higher latitudes of the Southern Ocean, but New Zealand, where is replaced by another species which we also saw today, it’s his relative the “Royal albatross”.

Both species considered real Ocean Wanderers. (Also the nick name of the EUROPA) They fly all over the Southern Ocean from the 60ºs to subtropical latitudes. Other albatrosses following our wake are the more common but nonetheless gorgeous Black browed albatross, with several adults and immature individuals flying around. A couple of Grey headed albatrosses as well. The diversity of Petrels also increased, with several new species for the trip being seen. The huge Northern Giant petrel, the beautiful Cape petrels, some Atlantic petrels, Spectacled and White chinned and Soft plumaged petrels. The majority of those species are related with high austral latitudes during this period of the year, their starting of the nesting season, meaning that we actually getting signs of reaching southern latitudes closer to Patagonia and our goal, “Cape Horn”.

Alleyne and I were crewmates with Wim from Hoorn to Tenerife and were sorry to hear of his accident. We know our shipmate wanted to do the whole passage and is disappointed to leave early. We wish him a speedy recovery.

Ahoy Europa! My brother Greg and I have recently booked for the Cape to Cape voyage in Feb/Mar 2017. Its still over 14 months away but I am very excited looking forward to the trip. I am following your log every few days with immense interest. Bon voyage, Michael