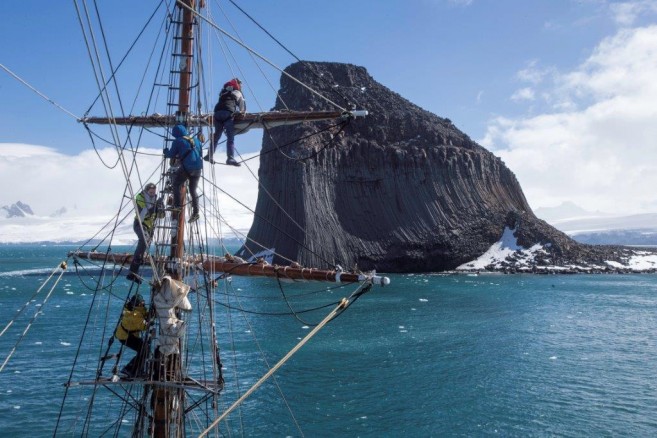 Following a combination of sailing and motor-sailing night across the Bransfield  Strait, we found ourselves entering through the narrow channel that gives access to the natural port of Yankee Harbour. In the early morning, Europa move into the sheltered bay between the 30 metres high ice cliff of Glacier Bluff and the narrow gravel spit forming the S side of the opening, named Spit Point.

This secluded bay was known to both American and British sealers as early as 1820, however the area was properly charted and named in 1935 by the Discovery II expedition. After breakfast all voyage crew gathers in the deckhouse for a few words on this landing site and its importance on the history of sealing in the South Shetlands. Soon we landed close to the tip of the gravel spit that characterises the place, close to several placid and friendly looking Weddell seals. Snoozing during the early hours, they recover from their deep dives at dusk.

Sun was shining amongst the high clouds, but the windy conditions made for a chilly start of the landing. Here the morning outing goes over the flat beach along the gravel spit. On the outer part of the bay, swell and waves break over the rocky shore, in the inside, Europa lays at anchor on calm seas, with a background of glaciers and icy peaks. Like natural sculptures, bits of ice of any shape, calved from the glacier fronts around and brought here by the tides, embellish the beach.

It all makes for a great scenery on exceptional weather. Unbeatable time and place to sit down for a while under the sun and contemplate the Antarctic landscape, seasoned by the many curious Gentoo penguins, seals and the impressive glaciers and mountains of Livingston island as sensational background.

The group kept walking along the bay, passing by the Gentoo Penguin main rookeries, towards a glacier front that we could see at the distance, until reaching the side of its imposing calving front, with its bases battered by the big seas. Several Chinstrap penguins hang around the area joined by a solitary Adelie penguin, a bit further away than the other species from its breeding grounds on the Weddell Sea area or down South in the West Antarctic Peninsula.

From there we just had to trace back our steps towards the pick up place, where old driftwood lays scattered at the beach, around the remains of a sealers try pot, used to boil the blubber of the thousands of Elephant seals slaughtered here during the 19th century.

Back on board we enjoy lunch still at the shelter provided by Yankee Harbour, while we could feel the wind picking up. Better to head off the bay soon, in case the strong gusts keeps escalating making more difficult the manoeuvring through the narrows.

Next was to head towards the photogenic Edinburgh Hill. Both engines push us against the wind for the 7nm we need to cover to approach this geological singularity of the area. Edinburgh Hill is an stunning volcanic knob forming the N side of the entrance to Moon Bay in the E part of Livingston Island. Its sheer faces are built up of impressive basalt columns rising out of the sea. Photographed and named by Scottish geologist David Ferguson in 1913-14. The feature was renamed High Point in 1935 by DI personnel on the Discovery II but the original name has been approved.

With Klaas on the wheel Europa approaches the cliffs getting to the stunning classic columnar basalt formation, standing nearly 150 meters straight out of the sea. All of us dress warmly and climb up the rig or join the guides and our fellow traveller Tito on deck. The views from the decks or aloft are impressive, not just because of the appealing basaltic structures of the volcanic plug, but also because the rugged, alpine and heavily glaciated Livingston Island reveal itself on all her magnificence at the background. The almost perfectly hexagonal shaped rock columns are beautifully deformed into a smooth bellied curve, and are a striking soft grey colour against the bright glaciers which surround it.

Bergy bits line up around the hill driven by the currents and winds. The same wind that we take advantage of, to enjoy a great afternoon of sailing. Europa turns around while Tito give comprehensive explanations on deck about the geology of what we just seen. At that point Lower Topsails are unfurled, Inner jib, Dekzbabber and Aap, and soon we set this canvas and start our way to our planned anchorage at Half Moon Island, place that we will share for a few hours with the tourist cruise ship “Sea Spirit”.

In the meantime the wind decreased a bit, now blowing a fair breeze of 15 to 20kn from the WSW, as we steer the ship heading to Half moon. The spectacular Friesland ridge

overlooks our activities from his majestic high perch over the peaks and glaciers of Livingston Island at our Starboardside. It was first mapped by the British in 1968, but the first recorded non-government climbing on the island was in 1976. This spectacular mountain range is part of the Tangra Mountains, extending 15.5 km northeastward from Botev Point to Shipka Saddle, and is 5 km wide. Rising to 1,684 m at its highest point, Mount Friesland, that names its main ridge. This superb peak was not climbed until December 1991, by Jorge Enrique and Francesc Sàbat from the Spanish Juan Carlos station at South Bay, west of the mountains.

Arriving to our anchorage for the night, sails come down and are furled before dinner. Once done with the evening meal it was time to do our traditional South Georgia Heritage Trust auction. When we landed at Grytviken, our guides picked up several items that were not for sale at the museum-shop, specially put apart for the purpose of auctioning them on board visitor’s ships, with the goal of rising money to collaborate with the Habitat Restoration projects in South Georgia.

Bob the Doc was on fire tonight as the official auctioneer, assisted by the guide Belén. A great total of 1530 USD was collected, sure a good contribution for the South Georgia Heritage Trust to keep going with their projects in the extraordinary island of South Georgia.

Once finished, many got their last drinks on deck under a gorgeous sunset behind the mountains, while the wind blows up the snow from their high ridges, before joining an improvised Larry and Steve flute and guitar concert in the Deckhouse.

Hi Jordi (and the voyage crew), I just read all the blogs from Montevideo onwards. Such a great trip; brings back lots of memories from our similar trip one year ago. Antarctica and Europa are unique. Thanks a lot for sharing the stories, and the pictures, Rob.

Wonderful descriptions in the Log entries. I have really enjoyed following your track, as Roger, my nephew is on board. Greetings to all from New Zealand. I shall certainly follow your track again in the future. Happy Christmas