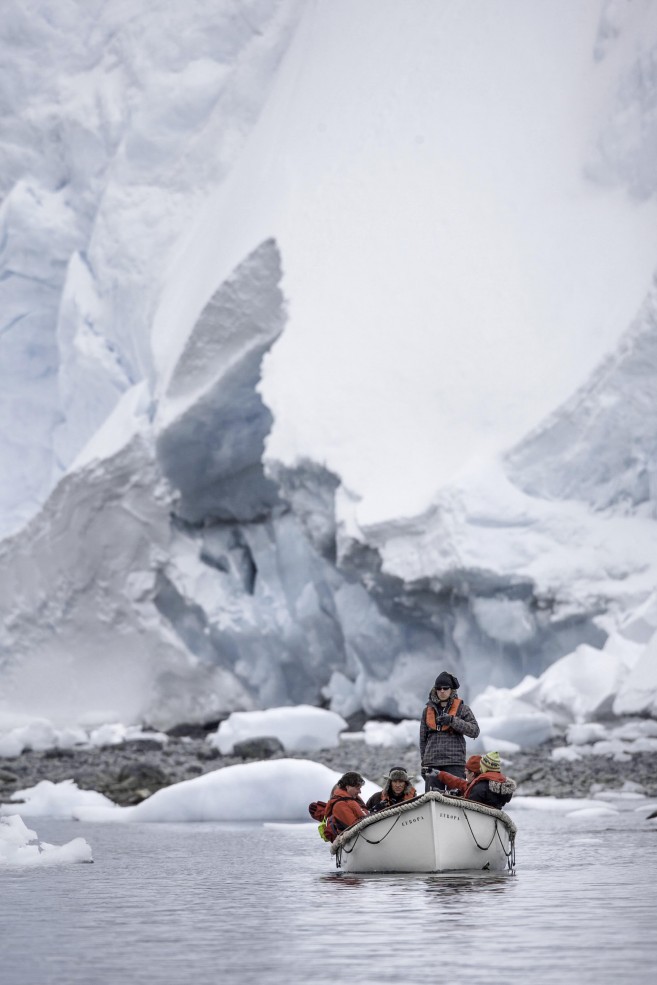 Melchior Islands, Zodiac cruise and starting our way to Ushuaia through the Drake Passage. Great farewell to our fantastic experience in the Antarctic continent, the no-man land.

After the great last evening at Dallman Bay, with fantastic sunset, calm waters, icebergs and whales all around, we drop anchor just before midnight at Andersen harbour in the East Melchior Islands. This archipelago is formed by many low, ice-covered islands. They were first seen but left unnamed by a German expedition under Dallmann, 1873-74. But the French Antarctic Expedition under Charcot, 1903-05 roughly charted the area, naming them after Vice Admiral Melchior of the French Navy. All the islands in the group are named as letters on the Greek alphabet There we spend a quiet night at anchor, while the wind slowly but steadily increases throughout the night. Until we wake up with winds of 25 knots. That made us think about the cruise, as 20 to 25 knots is the limit for an enjoyable cruise, but Eric and Jordi, after having a look at how the conditions are evolving from the early morning, decide to launch the zodiacs and sloopy, and ring the three bells to gather us all and start with the cruises.

Soon we started our final Antarctic activity and began cruising around the icebergs, channels, bays and glacier fronts of the Melchior Archipelago. With Jordi leading the way we explored the area and sneaked through some channels that are only possible to discover in a cruise like that. Some of them were still blocked by sea-ice. Remains of fast-ice still from last winter. The whole area is not well charted, and as an example one of the most spectacular channels (Bremen Kanal) has just been recently reported. In 2003 another expedition-cruise ship was doing a zodiac cruise in the area and for first time they pass through an unreported channel. Until then it was one island covered by a glacial dome, but after part of the glacier collapsed, it ended up being two different islands. Today a sea-ice sheet and several calvings from the glaciers framing it, blocked this channel. Impossible to navigate, but instead we stop alongside the sea-ice edge, where a large number of Weddelll seals and a few Crabeater seals rest.

Normally these seals are more spread out, but today they were grouped over the fast ice, possibly waiting for the channels to open and occupy different locations along them, or also aggregating on the calm and wind protected areas in those channels for a good snooze before starting their daily deep foraging dives. All around us tall glacier fronts edge the narrow channel, giving impressive views while we cruise the shallow waters. Two sailing yachts are moored on a cosy small cove, protected from the harsh weather outside in more open waters. As soon as we stick our noses out off the protected narrows and bays, we face the relatively strong wind and swell, making our progress more slow and wet. We also got some amazing views of some of the huge icebergs stuck in the Sound, the stretch of water separating Western and Eastern Melchiors, and the semi-abandoned Argentinean Base “Melchior”.

All in all a great last Antarctic experience, in our last Antarctic day! Some strong wind gusts as we are arriving on board with the last zodiacs, make the Europa drag her anchor and she had to be re-anchored again while we have lunch. Back on board satisfied smiles were on our faces while we chat about our Antarctic experiences and drink a hot chocolate prepared by our galley crew Sophie, Gjalt and Gerda. Soon after lunch we get all ready to start heading North and face the Drake Passage. Safety ropes and nets were put in place as a safety measure for the open water sailing, and we all started our watch system again. As we get off our anchorage and make our way through “The Sound”, we start unfurling and setting sails, taking advantage of the favourable winds on this sunny and windy afternoon. Like that, first Top sails, Courses and Lower staysails are set, and off we go, straight into the waters of the Drake Passage, where we will spend the next days on our way to Ushuaia. As we leave the Melchior Archipelago behind, we pass by a huge tabular iceberg. Those don’t come from regular glaciers, but from the ice shelfs that slide from land onto the sea surface. Sometimes, big chunks break off and drift for many years driven by the oceanographic currents and winds. Afterwards, the wind increases and we sail close hauled on port tack, dealing with gusts over 40 knots in the evening, and practicing again our heavy weather sailhandling, as sails are taken away and set again depending on the evolution of the weather situation.